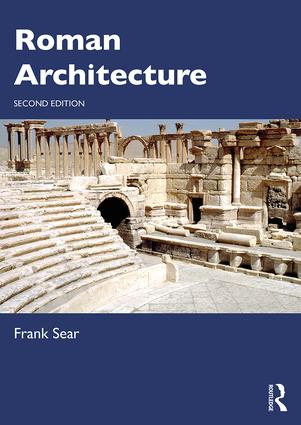 In this fully updated new edition, Frank Sear offers a thorough overview of the history of architecture in the Roman Empire.

Arranged logically in six historical sections interspersed with material on Roman architects and their techniques, the building types found in Roman cities and the different buildings found in the Roman provinces, this volume now contains the latest insights into Roman architecture and takes account of the last 20 years of scholarship. This seminal work covers the architecture of the Republic, Age of Augustus, the eastern and western empire, Roman North Africa, and the Late Antique period, exploring subjects such as patronage, building techniques and materials, Roman engineering, town planning, and imperial propaganda in a concise and readable way.

Illustrated with nearly 300 photographs, maps and drawings, Roman Architecture continues to be the clearest introductory account of the development of architecture in the Roman Empire.

"Sear’s unrivalled knowledge of Roman architecture allows him to present a vast array of buildings and urban landscapes in enviably clear and concise prose. He sets developments in buildings’ techniques, styles and functions illuminatingly in their wider historical context. Time and again he picks out telling detail to which his sharp eye gives meaning." - Ewen Bowie, Corpus Christi College, University of Oxford, UK.

"In this extensively rewritten and updated edition of his classic history of Roman architecture, Frank Sear proves both an authoritative and reliable guide and one propelled by his hallmark enthusiasm for all aspects of architecture." - Andrew Wallace-Hadrill, University of Cambridge, UK.

3. The Age of Augustus

Frank Sear is a graduate of Cambridge University, where he did both his undergraduate and postgraduate work. As a Scholar at the British School he did research on Roman Wall and Vault Mosaics, and as a Cotton Fellow he excavated in Benghazi and Lepcis Magna, Libya. In 1975 he took up a lecturing position at the University of Adelaide where he taught Latin, Greek and Classical Archaeology. He has since been a visiting scholar at the German Archaeological Institute in Berlin, a Fellow of Corpus Christi College, Oxford, and Hugh Last Fellow at the British School at Rome. He is also a Fellow of the Society of Antiquaries of London and a Fellow of the Australian Academy of the Humanities. He was Professor of Classical Studies at the University of Melbourne from 1991-2009 and is now Professor Emeritus. He was co-Director of the Australian Pompeii project from 1978 to 1988, and since 1990 has directed the Australian Roman Theatres project, surveying the theatres at Gubbio, Taormina, Benevento and Pompeii in Italy, Jerash in Jordan, and Orange in France. He has written numerous articles on his archaeological work and published a number of books including Roman Wall and Vault Mosaics, Roman Architecture, and Roman Theatres.