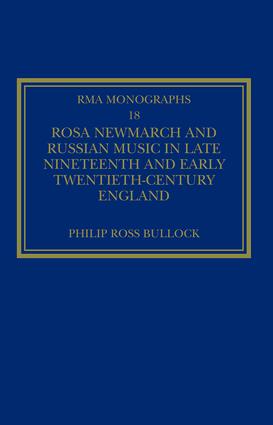 Philip Ross Bullock looks at the life and works of Rosa Newmarch (1857-1940), the leading authority on Russian music and culture in late nineteenth- and early twentieth-century England. Although Newmarch's work and influence are often acknowledged - most particularly by scholars of English poetry, and of the role of women in English music - the full range of her ideas and activities has yet to be studied. As an inveterate traveller, prolific author, and polyglot friend of some of Europe's leading musicians, such as Elgar, Sibelius and JanÃ¡cek, Newmarch deserves to be better appreciated. On the basis of both published and archival materials, the details of Newmarch's busy life are traced in an opening chapter, followed by an overview of English interest in Russian culture around the turn of the century, a period which saw a long-standing Russophobia (largely political and military) challenged by a more passionate and well-informed interest in the arts Three chapters then deal with the features that characterize Newmarch's engagement with Russian culture and society, and - more significantly perhaps - which she also championed in her native England; nationalism; the role of the intelligentsia; and feminism. In each case, Newmarch's interest in Russia was no mere instance of ethnographic curiosity; rather, her observations about and passion for Russia were translated into a commentary on the state of contemporary English cultural and social life. Her interest in nationalism was based on the conviction that each country deserved an art of its own. Her call for artists and intellectuals to play a vital role in the cultural and social life of the country illustrated how her Russian experiences could map onto the liberal values of Victorian England. And her feminism was linked to the idea that women could exercise roles of authority and influence in society through participation in the arts. A final chapter considers how her late interest in the music of Czechoslovakia picked up and developed these themes in the context of interwar Europe.

'… [Rosa Newmarch's] literary accomplishments made her the first and foremost authority on Russian music and culture in England (and the only such woman in England or Russia) around the turn of the last century. … she sought not only to educate the British people about Russian music and culture but also to promote music and the arts in England as a means to a more enlightened society. … Mrs Newmarch was well overdue for a book of her own; Mr Bullock is to be congratulated for having supplied it.' The Russian Review 'Philip Bullock's considerable achievement is to weave together disparate narratives into a single study of Newmarch that uses her work on Russian music as a lens through which to view late Victorian and Edwardian English musical life, taste, politics, and social convention.' Music and Letters 'Taken as a whole, Philip Bullock's monograph is an admirably researched and well documented volume, introducing a wealth of information concerning the study of Russian music in Great Britain. … We await his future publications with expectation.' Fontes Artis Musicae 'What is so refreshing about this book […] is that Bullock tackles head-on the research and interpretive problems associated with Newmarch, her writings, and her readers, using this detailed observations as springboards for argument and speculation. … Starting from first principles, Bullock offers the most thorough list to date of Newmarch's published output.' Victorian Studies ’Bullock’s account of Newmarch’s life and writings offers a readable and wide-ranging survey of her activities and the social context which informed her attitudes and values.’ Journal of the Society for Musicology in Ireland

This series was originally supported by funds made available to the Royal Musical Association from the estate of Thurston Dart. Its purpose is to provide a medium for specialized investigations of a topic, concept or repertory - studies of a kind that would not normally be feasible for commercial publishers and that would be too long for most periodicals.