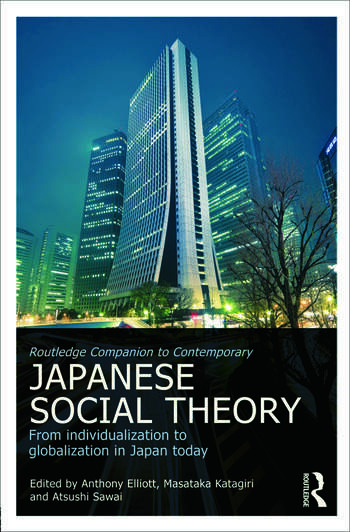 The Routledge Companion to Contemporary Japanese Social Theory breaks new ground in providing a detailed, systematic appraisal of the major traditions of social theory prominent in Japan today – from theories of identity and individualization to globalization studies. The volume introduces readers to the rich diversity of social-theoretical critique in contemporary Japanese social theory.

The editors have brought together some of the most influential Japanese social scientists to assess current trends in Japanese social theory, including Kazuhisa Nishihara, Aiko Kashimura, Masahiro Ogino, Yumiko Ehara and Kiyomitsu Yui. The volume also contains dialogues with these Japanese contributors from authoritative Western social theorists – including, among others, Axel Honneth, Roland Robertson, Bryan S. Turner, Charles Lemert and Anthony Elliott – to reflect on such developments. The result is an exciting, powerful set of intellectual exchanges. The book introduces, contextualizes and critiques social theories in the broader context of Japanese society, culture and politics – with particular emphasis upon Japanese engagements and revisions of major traditions of social thought. Divided into two sections, the book surveys traditions of social thought in Japanese social science and presents the major social issues facing contemporary Japan.

Anthony Elliott is Chair of Sociology at Flinders University, Australia and Visiting Research Professor at the Open University, UK. His recent books include Mobile Lives (Routledge, 2010, with John Urry) and On Society (Polity Press, 2012, with Bryan S. Turner).

Masataka Katagiri is a Professor at Chiba University, Chiba. His recent books include Jiko no Hakken: Shakaigaku-shi no Furontia ([Discovery of the Self: Frontier of the History of Sociology], Seakai-shiso-sha, 2011) and Ninchi Shakaigaku no Koso: Kategori, Jiko, Shakai ([The Basic Idea of Cognitive Sociology: Category, Self and Society], Sekai-shiso-sha, 2006).

Atsushi Sawai is Professor of Sociology at Keio University, Tokyo. His recent books include Karl Manheim: Jidai o Shindansuru Bomeisha ([Karl Mannheim: An Exile Diagnosing an Epoch], Toshin-do, 2004) and Shi to Shibetsu no Shakaigaku ([The Sociology of Death and Bereavement: A Social Theory Approach], Seikyu-sha, 2005).