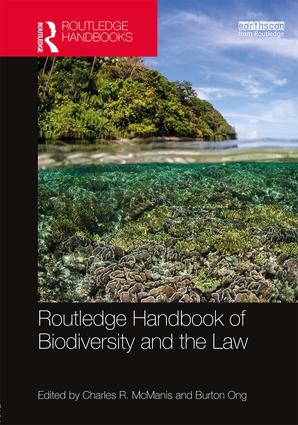 Routledge Handbook of Biodiversity and the Law

This volume provides a reference textbook and comprehensive compilation of multifaceted perspectives on the legal issues arising from the conservation and exploitation of non-human biological resources. Contributors include leading academics, policy-makers and practitioners reviewing a range of socio-legal issues concerning the relationships between humankind and the natural world.

The Routledge Handbook of Biodiversity and the Law includes chapters on fundamental and cutting-edge issues, including discussion of major legal instruments such as the Convention on Biological Diversity and the Nagoya Protocol.

The book is divided into six distinct parts based around the major objectives which have emerged from legal frameworks concerned with protecting biodiversity. Following introductory chapters, Part II examines issues relating to conservation and sustainable use of biodiversity, with Part III focusing on access and benefit-sharing. Part IV discusses legal issues associated with the protection of traditional knowledge, cultural heritage and indigenous human rights. Parts V and VI focus on a selection of intellectual property issues connected to the commercial exploitation of biological resources, and analyse ethical issues, including viewpoints from economic, ethnobotanical, pharmaceutical and other scientific industry perspectives.

"This book illuminates the complex set of legal issues surrounding biodiversity by examining them from a wide range of different perspectives. The editors are to be commended for the incredibly rich, varied, and informative scholarship that they have brought together in one volume." - Prof. Graeme B. Dinwoodie, University of Oxford, UK

Chapter 1: Biodiversity and the Law: Mapping the International Legal Terrain

Chapter 2: Biodiversity and the Law in Brief

Part II: Conservation and Sustainable Use of Genetic Resources

Chapter 5: The International Legal Framework for the Protection of and Sustainable Use of Marine Biological Resources

Chapter 7: Biotechnology, Biodiversity and the Law

Chapter 8: Legal Responses in the United States to Biodiversity Loss and Climate Change

Chapter 10: The International Treaty for Plant Genetic Resources on Food and Agriculture: Toward the Realisation of Farmers’ Rights as a Means of Protecting Biodiversity

Chapter 12: A Realized Benefit from Bioprospecting in the Wake of the Convention on Biological Diversity: The Impact of Natural Products Discovery Programs on our Knowledge of the Flora of Madagascar

Chapter 13: Regulatory Measures on Access and Benefit Sharing for Biological and Genetic Resources: National and Regional Perspectives from the Philippines, Singapore and ASEAN

Chapter 16: Traditional Knowledge: Lessons from the Past, Lessons for the Future

Chapter 19: Where Custom is the Law: The Fundamental Role of Customary Law in Securing Protection of Traditional Knowledge under the Nagoya Protocol

Chapter 22: Sisyphus Redivivus? The Work of WIPO on Genetic Resources and Traditional Knowledge

Chapter 23: Is the Whole Greater than the Sum of its Parts? A Critical Reflection on the WIPO IGC

Chapter 25: Making Legal Use of the Valuation of Nature

Chapter 26: Bounded Openness as the Modality for the Global Multilateral Benefit-Sharing Mechanism of the Nagoya Protocol

Burton Ong is Associate Professor in the Faculty of Law at the National University of Singapore, where he was Deputy Director of the Asia-Pacific Centre for Environmental Law between 2014 and 2017. He teaches and researches in the areas of Competition Law, Intellectual Property and Contract Law. He is the editor of Intellectual Property and Biological Resources (2004) and has an interest in the biodiversity and wildlife laws of the ASEAN member countries.