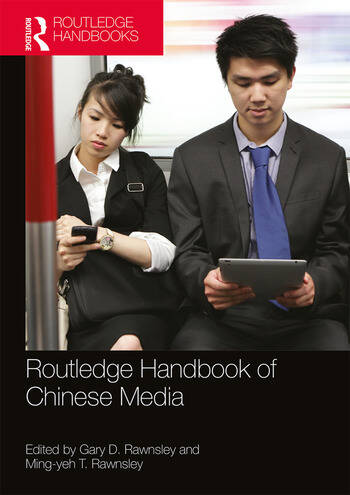 The study of Chinese media is a field that is growing and evolving at an exponential rate. Not only are the Chinese media a fascinating subject for analysis in their own right, but they also offer scholars and students a window to observe multi-directional flows of information, culture and communications within the contexts of globalization and regionalization. Moreover, the study of Chinese media provides an invaluable opportunity to test and refine the variety of communications theories that researchers have used to describe, analyse, compare and contrast systems of communications.

The Routledge Handbook of Chinese Media is a prestigious reference work providing an overview of the study of Chinese media. Gary and Ming-yeh Rawnsley bring together an interdisciplinary perspective with contributions by an international team of renowned scholars on subjects such as television, journalism and the internet and social media. Locating Chinese media within a regional setting by focusing on ‘Greater China’ (the People’s Republic of China, Taiwan, Hong Kong, Macau and overseas Chinese communities; the chapters highlight the convergence of media and platforms in the region, and emphasise the multi-directional and transnational character of media/information flows in East Asia.

Contributing to the growing de-westernisation of media and communications studies, this handbook is an essential and comprehensive reference work for students of all levels and scholars in the fields of Chinese studies and media studies.

'The disciplinary maturity of Chinese communication and media studies is on show in this strong collection. Established and emerging scholars have contributed to a volume that ranges across most of the topics that constitute a grounding for students.' – Professor Stephanie Hemelryk Donald, Head of School of the Arts, University of Liverpool, UK

"The present effort provides many perspectives on all types and forms of mass media (newspapers, party press, Internet, photography, broadcasting, television, gaming, public-service broadcasting, documentary), incorporating many aspects and issues (imperialism, soft power, policy, investigative journalism, social mobilization, nationalism, copyright, internationalization) and a variety of approaches (e.g., historical, case study, quasi-autobiographical, textual analysis, content analysis, interviewing, cyber-conflict analysis).  Though most of the 28 chapters cover the People’s Republic of China, the editors include three chapters on Hong Kong and three on Taiwan.  The book provides a wealth of information and viewpoints...this volume accomplishes what it sets out to do, and it will serve as an entry point into studies of Chinese media.  Summing Up: Recommended. Lower-division undergraduates through faculty." -J. A. Lent, independent scholar, CHOICE

"The Routledge Handbook of Chinese Media provides scholars and students with rich materials to comprehend modern Chinese media and society especially in respect of political objectives. The inclusion of case studies on Taiwan and Hong Kong in the volume reflects the heterogeneity rather than the homogeneity in the term, “Chinese media”, as the media in these locations face different sets of challenges to fulfill their democratic duties and ideals." Shih-Chien Chang, China Policy Institute: Analysis

"The handbook offers a large pool of perspectives, evidence, and analyses on Chinese media. It is a shining gem in the field, one that decodes the duality and complexities surrounding the media and their role in mainland China, Taiwan, and Hong Kong." Yavor A. Kostadinov, Ming Chuan University, International Journal of Communication 10(2016) pp. 3312