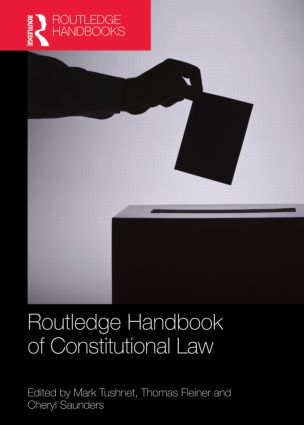 The Routledge Handbook of Constitutional Law is an advanced level reference work which surveys the current state of constitutional law. Featuring new, specially commissioned papers by a range of leading scholars from around the world, it offers a comprehensive overview of the field as well as identifying promising avenues for future research. The book presents the key issues in constitutional law thematically allowing for a truly comparative approach to the subject. It also pays particular attention to constitutional design, identifying and evaluating various solutions to the challenges involved in constitutional architecture.

The book is split into four parts for ease of reference:

Providing up-to-date and authoritative articles covering all the key aspects of constitutional law, this reference work is essential reading for advanced students, scholars and practitioners in the field.

'This volume enables readers to glimpse constitutional theory and practice around the globe. In brief essays (organized around the themes of constitutionalism, government structures, and various forms of rights), the authors address both longstanding and new problems addressed by constitutional orders. Moreover, rather than country-by-country comparisons, this Handbook focuses on the ideas and values that animate constitutional design; examples work in service of a subject matter, rather than as end unto themselves. As a consequence, this Handbook invites readers to reflect on the aspirations that constitutions embody and the challenges that they face.' Judith Resnik, Arthur Liman Professor of Law, Yale Law School, USA

Mark Tushnet is William Nelson Cromwell Professor of Law, Harvard Law School author of "Why the Constitution Matters," "The Constitution of the United States: A Contextual Analysis," and numerous other books on constitutional law and US legal history

Thomas Fleiner is Professor Emeritus. University of Fribourg, Switzerland and was former director of the Institute of Federalism. Professor Fleiner has served as a legal expert for Swiss and foreign governments and has been a guest professor in eight countries.

Cheryl Saunders is Laureate Professor, Melbourne Law School. President Emeritus, International Association of Constitutional Law. Professor Saunders also served as former president of the International Association of Centers for Federal Studies. She is also the author of The Constitution of Australia: A Contextual Analysis (Hart Publishing Ltd, 2011) and various books, chapters and articles on comparative constitutional law and method.