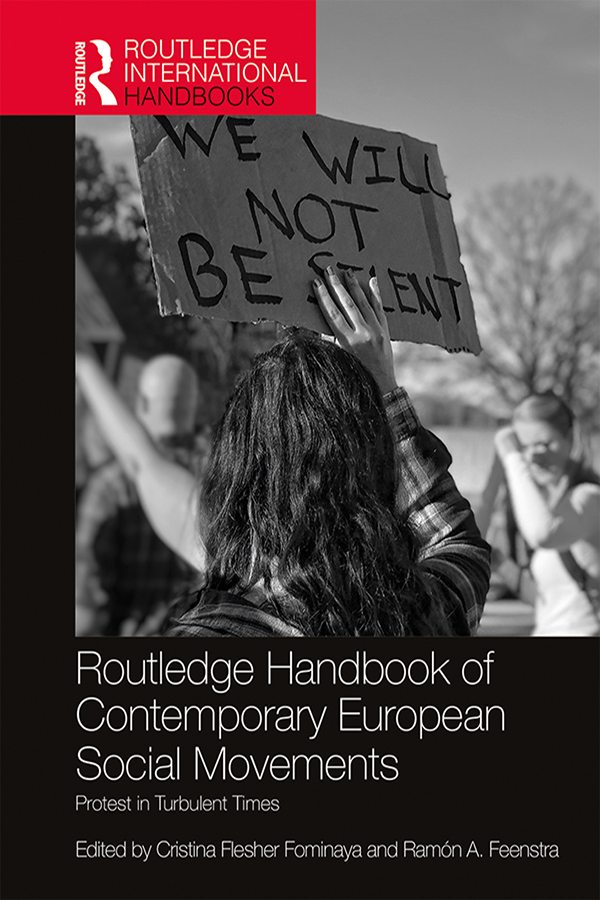 The book is divided into eight sections: Visions of Europe; Contemporary models of democracy; Historical evolution of major European movements; Feminism and sexualities; Movement diffusion within and beyond Europe; Anti-austerity movements; Technopolitical and media movements; and Movements, parties and movement-parties. Key theories and empirical trajectories of core movements, their central issues, debates and impacts are covered, with a focus on how these have influenced and been influenced by their European context. Democracy, and how social movements understand it, renew it, or undermine it, forms a core thread that runs through the book.

Written in a clear and direct style, the Handbook provides a key resource for students and scholars hoping to understand the key debates and innovations unfolding in the heart of European social movements and how these affect broader debates on such areas as democracy, human rights, the right to the city, feminism, neoliberalism, nationalism, migration and European values, identity and politics. Extensive references and sources will direct readers to areas of further study.

"At a time when the very idea of Europe as a distinct political space comes under multiple challenges, exploring the grassroots political dynamics that are both contributing to the current uncertainty and prefiguring new arrangements is more and more urgent. Flesher Fominaya and Feenstra’s excellent collection will provide massive food for thought to all those who have at their heart the future of Europe as a democratic polity."

"Contemporary Europe hosts a wide array of social movements that, due to their sheer number, diversity and complexity, cannot be overviewed by a single scholar. Accordingly, collaborative work is required of which this edited volume is an outstanding example. Both renowned older and promising young specialists on social movements and protest campaigns have contributed to this topical volume. It covers much ground and provides many insights into the evolution, structures and challenges of Europe’s social movements in these times that, as indicated in the book title, are indeed ‘turbulent’."

1. Visions of a Good Society: European Social Movements in the Age of Ideologies and Beyond

2. How many ‘Europes’? Left-Wing and Right-Wing Social Movements and their Visions of Europe

3. From ‘Fortress Europe’ to ‘Refugees Welcome’: Social Movements and the Political Imaginary on European Borders

4. Fields of Contentious Politics: Policies and Discourse over "Islam vs. Christianity"

7. Democracy and Sortition. Arguments in Favor of Randomness

8. Hatred and Democracy? Ernesto Laclau and Populism in Europe

9. "Nothing Is Lost, Nothing Is Created, Everything Is Transformed": From Labor Movements to Anti-Austerity Protests

10. The Global Justice Movement in Europe

11. European Squatters’ Movements and the Right to the City

14. My Body, My Rules? Self-Determination and Feminist Collective Action in Southern Europe

15. Neither New nor Utopian (and yet Worthwhile): Queer and Feminist Genealogies, Conflicts and Contributions inside Spain´S 15-M Movement

Processes of Diffusion Within and Beyond Europe

16. Brokerage and the Diffusion of Social Movements in the Digital Era

18. Crossing the Ocean: The Influence of Bolivia’s MAS Movement on Spain’s Podemos Party

20. Alternative Forms of Resilience and the 2007 Crisis in Europe

21. "We Won’t Pay for the Crisis": Student and Youth Movements in European Anti-Austerity Protest

22. The Technopolitical Frameworks of Contemporary Social Movements: The European Case

26. The Long Shadow of Activism: Podemos and the Difficult Choices of Movement Parties

Cristina Flesher Fominaya is Excellence 100 Reader in Social Politics and Media at Loughborough University and an internationally recognized expert in European social movement and politics. She holds an MA and a PhD in Sociology from the University of California, Berkeley, and a BA summa cum laude in International Relations from the University of Minnesota. She has been researching and participating in European social movements since the early 1990s, exploring the dynamics of digital media use, deliberative cultures and collective identity formation in autonomous movements. Flesher Fominaya has published and edited widely in the area of social movements, and has two books forthcoming: Social Movements in a Globalized World, 2nd ed. (Palgrave, 2019) and Democracy Reloaded: Inside Spain’s Political Laboratory from 15-M to Podemos (Oxford University Press, 2020).

Ramón A. Feenstra is Assistant Professor in the Department of Philosophy and Sociology at the Universitat Jaume I of Castellón (Spain). He graduated in Advertising and Public Relations at the same university (2005) and in History at UNED (Open University of Spain) (2013). In 2010, he became a Doctor of Moral Philosophy at the Universitat Jaume I. The fields he writes about are linked primarily to the democracy theory and communication ethics. He has published the following books: Refiguring Democracy: The Spanish Political Laboratory (co-authored with Simon Tormey, Andreu Casero and John Keane, Routledge 2017), Ética de la publicidad: Retos en la era digital (Dykinson, 2014) and Democracia monitorizad en la era de la nueva galaxia mediática (Icaria, 2012). He has published articles in journals such as The International Journal of Press Politics, Journal of Business Ethics, Media International Australia, Voluntas, The Journal of Civil Society, Revista del Clad Reforma y Democracia and Policy Studies.