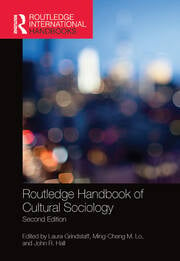 The thoroughly revised and updated second edition of the Routledge Handbook of Cultural Sociology provides an unparalleled overview of sociological and related scholarship on the complex relations of culture to social structures and everyday life. With 70 essays written by scholars from around the world, the book brings diverse approaches into dialogue, charting new pathways for understanding culture in our global era.

Short, accessible chapters by contributing authors address classic questions, emergent issues, and new scholarship on topics ranging from cultural and social theory to politics and the state, social stratification, identity, community, aesthetics, and social and cultural movements. In addition, contributors explore developments central to the constitution and reproduction of culture, such as power, technology, and the organization of work.

This handbook is essential reading for undergraduate and postgraduate students interested in a wide range of subfields within sociology, as well as cultural studies, media and communication, and postcolonial theory.

Laura Grindstaff is Professor of Sociology at the University of California, Davis, and a faculty affiliate in Gender Studies, Performance Studies, and Cultural Studies. Her research and teaching focus on the cultural dimensions of sex/gender, race, and class inequality, with a particular emphasis on American media and popular culture. She is the author of The Money Shot: Trash, Class, and the Making of TV Talk Shows as well as numerous articles and essays on aspects of popular culture ranging from sports and cheerleading to reality TV and social media.

is Professor of Sociology at the University of California, Davis. Lo's research focuses on culture, illness experiences, and civic engagement. She is the author of Doctors within Borders: Profession, Ethnicity, and Modernity in Colonial Taiwan (University of California Press, 2002; Japanese edition, 2014). A recent series of articles addresses the roles of cultural capital and non-dominant cultural resources in health, healthcare, and environmental activism.

is Research Professor of Sociology at the University of California, Santa Cruz and Davis. His published works include Apocalypse: From Antiquity to the Empire of Modernity (Polity, 2009), Visual Worlds (Routledge, 2005, with co-editors), Sociology on Culture (Routledge, 2003, with co-authors), and Cultures of Inquiry (Cambridge University Press, 1999).