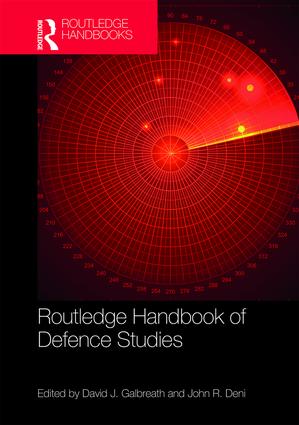 The Routledge Handbook of Defence Studies provides a comprehensive collection of essays on contemporary defence studies by leading international scholars.

Defence studies is a multi-disciplinary study of how agents, predominantly states, prepare for and go to war. Whereas security studies has been broadened and stretched to cover at times the near totality of international and domestic affairs, and war studies has come to mean not just operations and tactics but also experiences and outcomes, defence studies remains a coherent area of study primarily aimed at how defence policy changes over time and in relation to stimulating factors such as alterations in power, strategy and technology. This new Handbook offers a complete landscape of this area of study and contributes to a review of defence studies in terms of policy, security and war, but also looks forward to new challenges to existing conceptions of defence and how this is changing as states and their militaries also change. The volume is divided into four thematic sections: Defence as Policy; Defence Practice; Operations and Tactics; and Contemporary Defence Issues. The ability to review the field while also looking forward to further research is an important element of a sustainable text on defence studies. In as much as this volume is able to highlight the main themes of defence studies, it also offers an in-depth look into how defence issues can be examined and compared in a contemporary setting.

This Handbook will be of great interest to students of defence studies, strategic studies, war studies, security studies and IR.

David J. Galbreath is Professor of International Security and Director of the Centre for Security and Technology at the University of Bath, UK. He is former Editor-in-Chief of European Security (2009–2015) and Defence Studies (2013–2016), and author of, most recently, The European Minority Rights Regime (2012, with Joanne McEvoy).

is Research Professor of Security Studies at the US Army War College’s Strategic Studies Institute and an adjunct lecturer at American University’s School of International Service. He is author of NATO and Article 5 (2017).