Routledge Handbook of Food in Asia 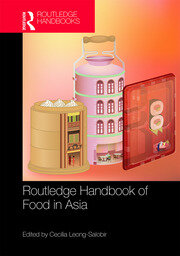 Routledge Handbook of Food in Asia

Throwing new light on how colonisation and globalization have affected the food practices of different communities in Asia, the Routledge Handbook of Food in Asia explores the changes and variations in the region’s dishes, meals and ways of eating.

By demonstrating the different methodologies and theoretical approaches employed by scholars, the contributions discuss everyday food practices in Asian cultures and provide a fascinating coverage of less common phenomenon, such as the practice of wood eating and the evolution of pufferfish eating in Japan. In doing so, the handbook not only covers a wide geographical area, including Japan, Indonesia, Vietnam, Singapore, India, China, South Korea and Malaysia, but also examines the Asian diasporic communities in Canada, the United States and Australia through five key themes:

Interdisciplinary in nature, this handbook is a useful reference guide for students and scholars of anthropology, sociology and world history, in addition to food history, cultural studies and Asian studies in general.

1. Introduction  Part 1: Food, Identity and Diasporic Communities  2. Geographies Of Fusion: Re-imagining Singaporean and Malaysian food in global cities of the West  3. Finding France in Flour: Communicating Colonialism in French Indochina through Bread  4. Japanese Culinary Mobilities: The Multiple Globalizations of Japanese Cuisine  5. Food and Identity Construction: The Impact of Colonization in Indonesian Society  6. Searching for Culinary Footprints: A question of cultural identity – Kristang foodways and the Portuguese culinary legacy in Melaka  7. Cooking in the Hmong Cultural Kitchen  Part 2: Food Rites and Rituals  8. Eating of Wood: The Practice of Mokujiki in Japan  9. Cooking for Demons, Soldiers and Commoners: History of a Ritual Meal in Java  10. Enjoying a Dangerous Pleasure: The Evolution of Pufferfish Consumption in Modern Japan  11. Crossing Japanese Rice Products with Italian Futurism: Fortune Cookies, Onigiri and Arancini as Communicant Rice-Bites  Part 3: Food and the Media  12. Food writing and culinary tourism in Singapore  13. Her Hunger Knows No Bounds: Female-Food Relationships in Korean Dramas  14. Untouched by Human Hands: Making and Marketing Milk in Singapore, 1900-2007  15. Feasting on ‘the Other’: Performing Authenticity and Commodifying Difference in Celebrity Chefs’ Food and Travel Television Programmes  16. ‘Sauce in the bowl, not on our shirt’: Food Pedagogy and Aesthetics in Vietnamese Ethnic Food Tours to Cabramatta, Sydney  Part 4: Food and Health  17. Uncle’s Body: Food, Obesity and the risk of middle class lifestyles in urban India  18. Shaping Nutrition: The Role of State Institutions in the Production of Nutritional Knowledge in Maoist China  Part 5: Food and State Matters  19. "Protect Agriculture and Food Safety!": Transnational Protests against Preferential Trade Agreements in East and Southeast Asia  20. Agriculture, Food Security, and the Trans-Pacific Partnership: Stability and Change in Japanese Agricultural Policymaking  21. Contesting the Corporate Food Regime in South and Southeast Asia  22. Japanese Foods (washoku) with Wine: A Study in Non-State Culinary Politics  23. Shanghai, Street Food and the Modern Metropolis

Cecilia Leong-Salobir is a food historian affiliated with the University of Wollongong and University of Western Australia. Her publications include Food Culture in Colonial Asia: A Taste of Empire and Urban Food Culture: Sydney, Shanghai and Singapore in the Twentieth Century. Cecilia serves on editorial advisory boards for Global Food History and Food, Culture & Society.