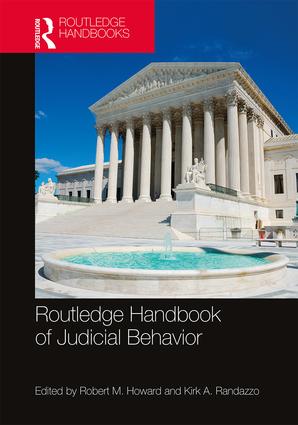 Interest in social science and empirical analyses of law, courts and specifically the politics of judges has never been higher or more salient. Consequently, there is a strong need for theoretical work on the research that focuses on courts, judges and the judicial process. The Routledge Handbook of Judicial Behavior provides the most up to date examination of scholarship across the entire spectrum of judicial politics and behavior, written by a combination of currently prominent scholars and the emergent next generation of researchers. Unlike almost all other volumes, this Handbook examines judicial behavior from both an American and Comparative perspective.

Each author in this volume provides perspectives on the most current methodological and substantive approaches in their respective areas, along with suggestions for future research. The chapters contained within will generate additional scholarly and public interest by focusing on topics most salient to the academic, legal and policy communities.

'In this edited volume, Professors Howard and Randazzo have produced an impressively comprehensive compilation of essays and analyses from many of the most insightful and productive scholars in the field of judicial politics. Among the volume’s major contributions is its section on comparative and international courts, an area of growing importance and impact in the study of law and courts. The editors’ meta-analytic essays bind the chapters together with key observations about current and future research to help students, scholars and citizens understand and evaluate institutional and behavioral dimensions to the rule of law.' - Stefanie A. Lindquist, Foundation Professor of Law and Political Science, Arizona State University

'This volume is a tour de force of the best of judicial politics. Howard and Randazzo compiled essays written by a veritable who’s who of judicial politics. The breadth of topics reflects the range of subjects examined by judicial scholars from the Supreme Court and other American courts to comparative and transnational courts. This book promises to become one of the standard reviews of judicial behavior, offering a master class on the competing theoretical accounts, methodological issues, and classic empirical puzzles.' - Paul Wahlbeck, Professor of Political Science, George Washington University

'Bob Howard and Kirk Randazzo have put together a comprehensive collection review essays in nearly every significant topic related to judicial decision-making, written by the most accomplished experts in the field. This volume is well-suited for a graduate course in judicial politics, because each chapter provides a sophisticated entrée into a particular subject, but could also be appropriate for advanced undergraduates.' - Joseph L. Smith, Associate Professor and Chair of the Department of Political Science, The University of Alabama

Conclusion: Where Do We Go From Here?

Robert M. Howard is professor of political science at Georgia State University. His main research interests are the impact of courts and litigation on social and public policy, and judicial decision making by the federal courts. He is the author of numerous articles and books, including Judging Law and Policy: Courts and Policymaking in the American Political System and Getting a Poor Return: Courts, Justice and Taxes. Dr. Howard has been the editor of the Justice System Journal as well as the editor of the book series Law, Courts, and Politics.

Kirk A. Randazzo is professor of political science at the University of South Carolina. His research focuses on judicial behavior in the United States under a variety of potential constraints and the effects of judicial independence for emerging democracies. His work has been published in several prestigious journals, including the American Journal of Political Science, the Journal of Politics, and Political Research Quarterly. Additionally, he has published three books, the latest of which is Checking the Courts: Law, Ideology, and Contingent Discretion (co-authored with Richard W. Waterman), published in 2014 by SUNY Press.