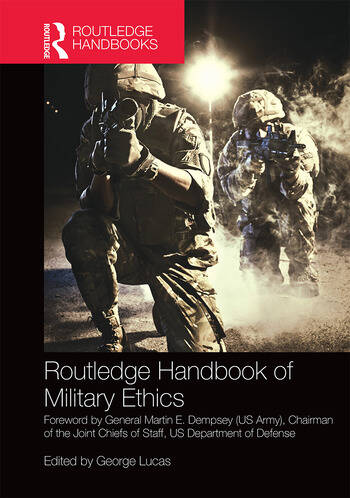 The Routledge Handbook of Military Ethics is a comprehensive reference work that addresses concerns held in common by the military services of many nations. It attempts to discern both moral dilemmas and clusters of moral principles held in common by all practitioners of this profession, regardless of nation or culture.

Comprising essays by contributors drawn from the four service branches (Army, Navy, Air Force, and Marine corps) as well as civilian academics specializing in this field, this handbook discusses the relationship of "ethics" in the military setting to applied and professional ethics generally. Leading scholars and senior military practitioners from countries including the US, UK, France, China, Australia and Japan, discuss various national cultural views of the moral dimensions of military service. With reference to the responsibilities of professional orientation and education, as well as the challenges posed by recent technological developments, this handbook examines the difficulties underpinning the fundamental framework of military service.

This book will be of much interest to students of military studies, war theory, ethics philosophy, sociology, war and conflict studies, and security studies.

George Lucas is Professor of Ethics and Public Policy Emeritus, at the Naval Postgraduate School, Monterey, and Distinguished Chair of Ethics (retired), U.S. Naval Academy, Annapolis. He is author of Military Ethics: What Everyone Needs to Know (2015), Anthropologists in Arms (2009) and editor of Ethics and the Military Profession (2008).