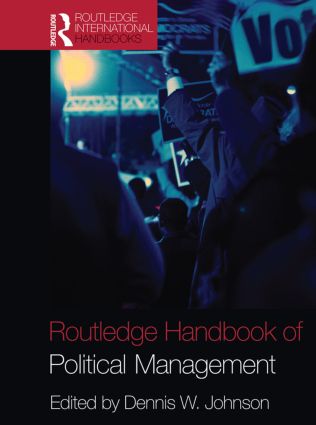 The Routledge Handbook of Political Management is a comprehensive overview of the field of applied politics, encompassing political consulting, campaigns and elections, lobbying and advocacy, grass roots politics, fundraising, media and political communications, the role of the parties, political leadership, and the ethical dimensions of public life. While most chapters focus on American politics and campaigns, there are also contributions on election campaigns in Europe, the Middle East, Russia, Australia, East Asia, and Latin America. In addition to a thorough treatment of campaign and elections, the authors discuss modern techniques, problems, and issues of advocacy, lobbying, and political persuasion, with a special emphasis throughout the volume on technology, the Internet, and online communications as political tools.

Grounded in the disciplines of political science, political communications, and political marketing, the Routledge Handbook of Political Management explores the linkages between applied politics and social science theory. Leading American and international scholars and practitioners provide an exhaustive and up-to-date treatment of the state of this emerging field. This publication is a major resource for advanced undergraduates, graduate students, and scholars of campaigns, elections, advocacy, and applied politics, as well as for political management professionals.

"This overview of political consulting practices in the U.S. and around the world is for anyone interested in what campaigns do and why they're structured as they are. Chapters contributed by a team of leading international experts assess the state of the art in political campaiging from message testing to online advocacy and grassroots lobbying. If you wanted one book to get you up to speed on campaign management practices in the U.S., Europe, and Asia, this is the book to get."

"For readers interested in aspects of contemporary political management, this volume is the perfect place to start. Johnson assembles an A-list of contributors to provide a rich and comprehensive collection of the most up-to-date information about a wide range of topics in applied politics."

Part 1: The Field of Political Management 1. Political Consulting: From its Inception to Today 2.Modern Political Campaigns in the United States 3. Political Consulting Worldwide 4. Political Management and Political Science 5. Political Management and Political Communications 6. Political Management and MarketingPart 2: American Campaigns and Elections 7. The Permanent Campaign 8. Political Management and the Technological Revolution 9. Message Testing in the Twenty-first Century10. The New Media in Political Campaigns: What the Future Holds 11. The Rise and Influence of "Monster" PACs 12. The Promise and Futility of American Campaign Financing 13. Campaigning Online14. Selling the Presidency 2004: A Marketing Perspective15. What Drives the Cost of Political Advertising? 16.Running for Office: The Candidate’s Job Gets Tougher, More Complex 17. The War of Ideas, Wedge Isues, Youth Recruitment, and Money 18. The Religious Right in American Politics Part 3: Campaigns Worldwide 19. Television Campaigning Worldwide20. Mobile Technology and Political Participation: What the Rest of the World Can Teach America 21. The Modern British Campaign 22. German Elections and Modern Campaign Techniques 23. Falafel and Apple Pie: American Consultants, Modernization and Americanization of Electoral Campaigns in Israel 24. Russia: Electoral Campaigning in a "Managed Democracy" 25.Australia and the Modern Election Campaign 26. Election Campaigns in the Philippines27. Evolution and Limitations of Modern Campaigning in East Asia: A Case Study of Taiwan 28. Mexican 2000 Presidential Election: Long Transition or a Sudden Political Marketing Triumph? Part 4: Lobbying and Advocacy 29. Creation of the U. S. Lobbying Industry 30. Best Practices in Online Advocacy for Associations, Nonprofits, and Corporations 31. Building Constituencies for Advocacy for Associations, Nonprofits, and Corporations, 32. Political Consultants, Interest Groups, and Issue Advocacy 33. Military and Defense Lobbying: A Case Study 34. Discoverying Our (Corporate) Grassroots: European Advocacy 2.0Part 5: Political Parties, Political Management, and Democracy 35. Campaign Consultants and Political Parties Today36. Network Marketing and American Political Parties37. Managing a Market-Orientation in Opposition and Government: Cases in the U.K. and New Zealand38. Machiavellian Marketing: Justifying the Ends and Means in Modern Politics 39. The Ethics of Campaigns and Public Affairs 40. Winning Over a Cynical Public: Debate over Stem Cell and Other Biotechnologies