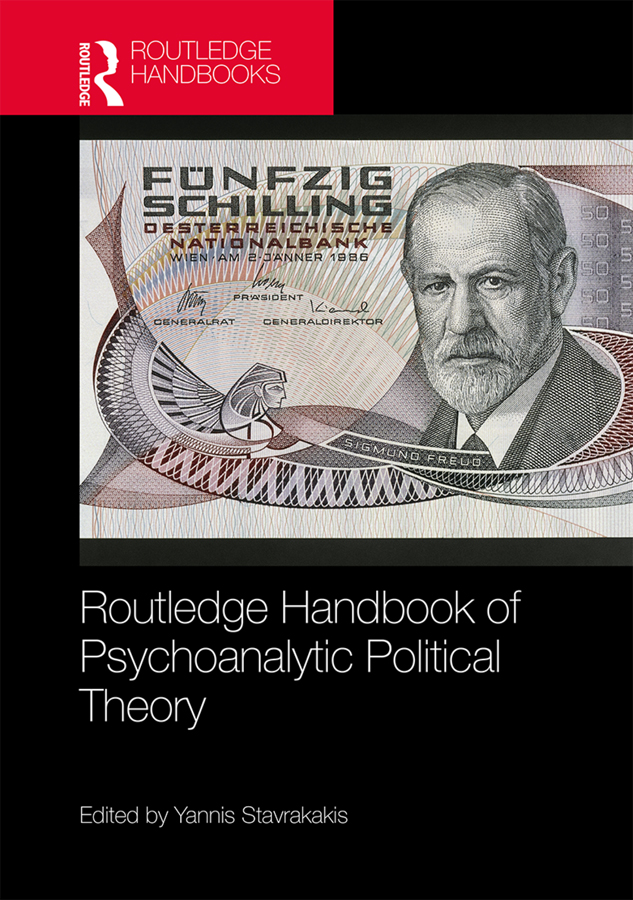 The emerging field of ‘psychoanalytic political theory’ has now reached a stage in its development and rapid evolution that deserves to be registered, systematically defined and critically evaluated. This Handbook provides the first reference volume which showcases the current state of psychoanalytic political theory, maps the genealogy of its development, identifies its conceptual and methodological resources and highlights its analytical innovations as well as its critical promise. The Handbook consists of 35 chapters offering original, comprehensive and critical reviews of this field of study. The chapters are divided into five thematic sections:

The Routledge Handbook of Psychoanalytic Political Theory will serve as scholarly reference volume for all students and researchers studying political theory, psychoanalysis, and the history of ideas.

"The Routledge Handbook of Psychoanalytic Political Theory introduces the reader into a new but rapidly growing field in the social sciences. It provides key texts by well known scholars on the ways in which psychoanalytic theory and practice have an impact on the political order. The editor Yannis Stavrakakis provides an illuminating and extensive introduction which explains the general organization and the basic themes and controversies. There is no doubt that the book will be a vital tool for those who want to explore and develop further the variety of theoretical/conceptual frameworks that the volume provides. It will also be useful to researchers who want to study empirically the influence of psychoanalytic approaches to themes and controversies in the areas of feminism, nationalism, consumerism, populism, etc.—Nicos Mouzelis, Emeritus Professor of Sociology, London School of Economics, UK

"Far from simply serviceable and convenient, this Routledge Handbook of Psychoanalytic Political Theory is handy in the robust, Chaucerian sense. Intellectually challenging and urgent, it explains the crucial, updated psychoanalytical concepts now impacting political theory, while providing a clear account of the various ways in which psychoanalysis and political theory related to each other previously. While the interventions of Freud and Lacan are, rightly, privileged, other formidable psychoanalytic figures also receive fresh attention. This is a volume that will be treasured."—Joan Copjec, Professor of Modern Culture and Media, Brown University, USA

"A must-read Handbook featuring a mix of established, mid- and early-career scholars working at the crossroads of psychoanalytic thought and socio-political theory. Covering an impressive range of themes, concepts, and issues, Stavrakakis and his team have assembled timely contributions that demonstrate the enduringly dynamic and productive interplay between these disciplines. Surely a work of reference for years to come!"—Jason Glynos, Professor of Political Theory, University of Essex, UK

6. Marcuse and the Freudian Left

10. Superego and the Law

15. Identification (With the Aggressor)

Yannis Stavrakakis studied political science in Athens and Essex. He has worked at the Universities of Essex and Nottingham before taking up a position at the Aristotle University of Thessaloniki in 2006. His research focuses primarily on contemporary political theory (with emphasis on psychoanalytic and post-structuralist approaches) and on the analysis of ideology and discourse in late modern societies (with emphasis on populism, environmentalism, post-democracy and the role of artistic practices).