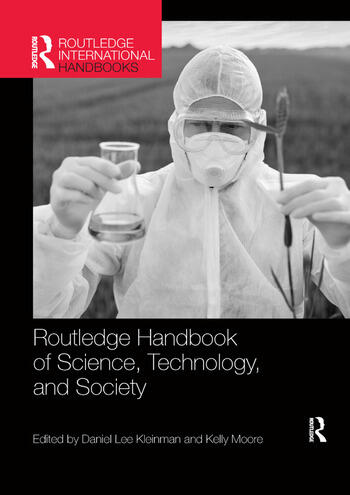 Over the last decade or so, the field of science and technology studies (STS) has become an intellectually dynamic interdisciplinary arena. Concepts, methods, and theoretical perspectives are being drawn both from long-established and relatively young disciplines. From its origins in philosophical and political debates about the creation and use of scientific knowledge, STS has become a wide and deep space for the consideration of the place of science and technology in the world, past and present.

The Routledge Handbook of Science, Technology and Society seeks to capture the dynamism and breadth of the field by presenting work that pushes the reader to think about science and technology and their intersections with social life in new ways. The interdisciplinary contributions by international experts in this handbook are organized around six topic areas:

This volume highlights a range of theoretical and empirical approaches to some of the persistent – and new – questions in the field. It will be useful for students and scholars throughout the social sciences and humanities, including in science and technology studies, history, geography, critical race studies, sociology, communications, women’s and gender studies, anthropology, and political science.

Introduction by Daniel Lee Kleinman and Kelly Moore  Part I: Bodies  1. The Emergence, Politics, and Marketplace of Native American DNA by Kimberly TallBear  2. Technoscience, Racism, and the Metabolic Syndrome by Anthony Ryan Hatch  3. Standards as ‘Weapons of Exclusion’: Ex-Gays and the Materialization of the Male Body by Tom Waidzunas  4. Curves to Bodies: The Material life of Graphs by Joseph Dumit and Marianne de Laet  Part II: Consuming Technoscience  5. Producing the Consumer of Genetic Testing: The Double-Edged Sword of Empowerment by Shobita Parthasarathy  6. The Social Life of DTC Genetics: The Case of 23andMe by Alondra Nelson and Joan H. Robinson  7. Cultures of Visibility and the Shape of Social Controversies in the Global High-tech Electronics Industry by Hsin-Hsing Chen  8. The Science of Robust Bodies in Neoliberalizing India by Jaita Talukdar  Part III: Digitization  9. Toward the Inclusion of Pricing Models in Sociotechnical Analyses: The SAE International Technological Protection Measure by Kristin Eschenfelder  10. The Web, Digital Prostheses, and Augmented Subjectivity by PJ Rey and Whitney Erin Boesel  11. Political Culture of Gaming in Korea amid Neoliberal Globalization by Dal Yong Jin and Michael Borowy  12. Cultural Understandings and Contestations in the Global Governance of Information Technologies and Networks by JP Singh  Part IV: Environments  13. Green Energy, Public Engagement and the Politics of Scale by Roopali Phadke  14. Political Scale and Conflicts over Knowledge Production: The Case of Unconventional Natural Gas Development by Abby Kinchy  15. Not Here and Everywhere: The Non-Production of Scientific Knowledge by Scott Frickel  16. Political Ideology and the Green-Energy Transition in the United States by David Hess  17. Risk State: Nuclear Politics in an Age of Ignorance by Sulfikar Amir  18. From River to Border: The Jordan between Empire and Nation-State by Samer Alatout  19. State-Environment Relationality: Organic Engines and Governance Regimes by Patrick Carroll and Nathaniel Freiburger  Part V: Technology Science Work  20. Invisible Production and the Production of Invisibility: Cleaning, Maintenance, and Mining in the Nuclear Sector by Gabrielle Hecht  21. Social scientists and humanists in the health research field: A clash of epistemic habitus by Mathieu Albert and Elise Paradis  22. Women in the Knowledge Economy: Understanding Gender Inequality through the Lens of Collaboration by Itai Vardi and Laurel Smith-Doerr  23. The Utilitarian View of Science and the Norms and Practices of Korean Scientists by Hee-Je Bak  24. Science as Comfort: The Strategic Use of Science in Post-Disaster Settings by Brian Mayer, Kelly Bergstrand, and Katrina Running  Part VI: Rules and Standards  25. Declarative Bodies: Bureaucracy, Ethics and Science-in-the-Making by Laura Stark  26. Big Pharma and Big Medicine in the Global Environment by Anne Figert and Susan Bell  27. On the Effects of E-Government on Political Institutions by Jane Fountain  28. Science, Social Justice and Post-Belmont Research Ethics: Implications for Regulation and Environmental Health Science by Rachel Morello-Frosch and Phil Brown

Daniel Lee Kleinman is Associate Dean for Social Studies at the Graduate School and Professor in the Department of Community and Environmental Sociology at the University of Wisconsin–Madison.

is Associate Professor of Sociology at Loyola University–Chicago.

"This Handbook shows how power relations are both exercised and disguised through apparently neutral expertise or artefacts, as well as how such linkages are disrupted by subaltern groups.  The articles offer STS methods for critical analysis to learn from struggles for social justice and to inform them." - Les Levidow, Editor, Science as Culture

"This timely set of essays results in much more than a summary of a field; it is an incisive and forward-looking collection, offering a substantive journey into new directions in STS scholarship today. The book will be widely read for its diversity of approaches, yet coherence of chapters that together challenge a rethinking of sociotechnical processes as they unfold in major areas of contemporary public debate." - Laura Mamo, Author of Queering Reproduction

Covering the domains of embodiment, consuming technoscience, digitization, environments, science as work, and rules and standards, the Handbook offers a fresh new way of organizing scholarship that investigates the relations between science, technology and society. A valuable addition to the literature, the Handbook highlights cutting edge research areas, paying particular attention to the institutional dimensions of science, cultural contexts and values, and issues of scale. - Kelly Joyce, Drexel University, Director, Center for Science, Technology and Society