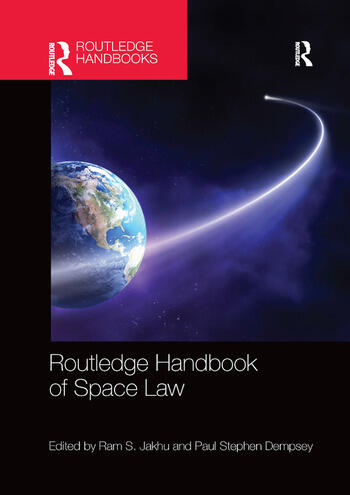 This handbook is a reference work providing a comprehensive, objective and comparative overview of Space Law.

The global space economy reached $330 billion in 2015, with a growth rate of 9 per cent vis-à-vis the previous year. Consequently, Space Law is changing and expanding expeditiously, especially at the national level. More laws and regulations are being adopted by space-faring nations, while more countries are adapting their Space Laws and regulations related to activities in outer space. More regulatory bodies are being created, while more regulatory diversity (from public law to private law) is being instituted as increasing and innovative activities are undertaken by private entities which employ new technologies and business initiatives. At the international level, Space Law (both hard law and soft law) is expanding in certain areas, especially in satellite broadcasting and telecommunications.

The Routledge Handbook of Space Law summarises the existing state of knowledge on a comprehensive range of topics and aspires to set the future international research agenda by indicating gaps and inconsistencies in the existing law and highlighting emerging legal issues. Unlike other books on the subject, it addresses major international and national legal aspects of particular space activities and issues, rather than providing commentary on or explanations about a particular Space Law treaty or national regulation.

Drawing together contributions from leading academic scholars and practicing lawyers from around the world, the volume is divided into five key parts:

This handbook is both practical and theore

Ram S. Jakhu is Director of, and a tenured Associate Professor at, the Institute of Air and Space Law at McGill University, in Montreal, Canada, where he teaches and conducts research in International Space Law, Law of Space Applications, National Regulation of Space Activities, and Public International Law. He has served as Director of the McGill Centre for the Study of Regulated Industries from 1999 to 2004 as well as the first Director of the MSS Program (and Senior Faculty Member) at International Space University, Strasbourg, France, from 1995 to 1998.

Paul Stephen Dempsey is Tomlinson Professor Emeritus of Global Governance in Air and Space Law and Director Emeritus of the Institute of Air and Space Law at McGill University. For more than two decades, he held the chair as Professor of Transportation Law, and was Director of the Transportation Law Program at the University of Denver. He was also Director of the National Center for Intermodal Transportation. Earlier, he served as an attorney with the Civil Aeronautics Board and the Interstate Commerce Commission (ICC) in Washington, D.C., and was Legal Advisor to the Chairman of the ICC.