Routledge Handbook of the Law of Armed Conflict 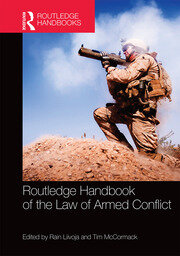 Routledge Handbook of the Law of Armed Conflict

The law of armed conflict is a key element of the global legal order yet it finds itself in a state of flux created by the changing nature of warfare and the influences of other branches of international law. The Routledge Handbook of the Law of Armed Conflict provides a unique perspective on the field covering all the key aspects of the law as well as identifying developing and often contentious areas of interest.

The handbook will feature original pieces by international experts in the field, including academics, staff of relevant NGOs and (former) members of the armed forces. Made up of six parts in order to offer a comprehensive overview of the field, the structure of the handbook is as follows:

The Routledge Handbook of the Law of Armed Conflict provides a fresh take on the contemporary laws of war and is written for advanced level students, academics, researchers, NGOs and policy-makers with an interest in the field.

Rain Liivoja is a Senior Lecturer and Society in Science – Branco Weiss Fellow at Melbourne Law School, University of Melbourne, Australia, and Affiliated Research Fellow of the Erik Castrén Institute of International Law and Human Rights, University of Helsinki, Finland.

is a Professor of Law at Melbourne Law School, University of Melbourne, Australia, and the Special Adviser on International Humanitarian Law to the Prosecutor of the International Criminal Court, The Hague, the Netherlands.

"I commend the editors of this book for having asked for, gathered, stuctured and revised the voices of an impressive array of scholars from around the world, and with their help produced a significant contribution to the literature of international humanitarian law. Most chapters, in addition to accurately presenting aspects of the existing law or their application to specific problems, also address the realities of contemporary armed conflicts, in particular, those not of an international character. They also take other applicable branches of international law - such as international human rights law - fully into account. The result is both informative and thought-provoking for scholars, practitioners and advanced students." - Marco Sassòli, Professor of International Law and Director of the Department of International Law and International Organization, University of Geneva, Switzerland

"An excellent and well structured survey of this vital area of international law, with over 40 contributors from the academy, the military, the national and international public service and civil society and from 15 or more countries. The volume provides a real sense of the application of established principle to emerging issues and of the sharp clash between humanity and military necessity in the application and development of that law." - Sir Kenneth Keith, Former Judge of the International Court of Justice, New Zealand

"In all, the book provides a revealing and enlightening overview of the major issues which emanate from the Law of Armed Conflict, which also encompasses international law and international human rights law. Copiously footnoted with extensive tables of treaties and cases, it also offers scholars a rich source of references for further research, which means that NGOs and policy makers will also find it useful." - Phillip Taylor MBE and Elizabeth Taylor, Richmond Green Chamb