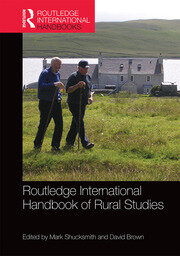 Rural societies around the world are changing in fundamental ways, both at their own initiative and in response to external forces. The Routledge International Handbook of Rural Studies examines the organisation and transformation of rural society in more developed regions of the world, taking an interdisciplinary and problem-focused approach. Written by leading social scientists from many countries, it addresses emerging issues and challenges in innovative and provocative ways to inform future policy. This volume is organised around eight emerging social, economic and environmental challenges:

Cross-cutting these challenges are the growing interdependence of rural and urban; the rise in inequality within and between places; the impact of fiscal crisis on rural societies; neoliberalism, power and agency; and rural areas as potential sites of resistance. The Routledge International Handbook of Rural Studies is required reading for anyone concerned with the future of rural areas.

Mark Shucksmith is Director of the Newcastle University Institute for Social Renewal, UK, where he is also Professor of Planning. His main areas of research include rural development, social exclusion in rural areas, rural housing, agricultural change, and rural policy. His books include Rural Transformations and Rural Policies in the US and UK (Routledge, 2012); Future Directions in Rural Development (Carnegie UK Trust, 2012); Comparing Rural Development: Continuity and Change in the Countryside of Western Europe (Ashgate, 2009); CAP and the Regions: the territorial impact of the CAP (CABI, 2005), Young People and Rural Policy in Europe (Ashgate, 2004), Housing in the European Countryside (Routledge, 2003), and Exclusive Countryside? Social Inclusion and Regeneration in Rural Britain (JRF, 2000). In 2007-2008 he chaired the Scottish Government’s Committee of Inquiry into Crofting, which led to the Crofting Reform Act 2010. He has also served on the UK Government’s Commission for Rural Communities, Affordable Rural Housing Commission, and Countryside Agency. He directed the Joseph Rowntree Foundation’s programme on Action in Rural Areas 1996-2000. Mark was vice president of the International Rural Sociological Association from 2004 to 2008, and was Programme Chair for the XI World Rural Sociology Congress in Norway in 2004. He has provided advice to governments and agencies in several countries, and to the OECD. He was awarded the OBE by the Queen in 2009 for services to rural development and to crofting.

David L. Brown is International Professor of Development Sociology, and co-director of the Community & Regional Development Institute at Cornell University in Ithaca, New York. Professor Brown is a social demographer whose research focuses on migration and development, and the production and reproduction of spatial inequalities. He has published over 50 scholarly articles and written or edited 11 books on rural population and society. His most recent books include Rural Transformations and Rural Policies in the UK and US (Routledge, 2012) (co-edited), Rural Communities in the 21st Century: Resilience and Transformation (Polity, 2011) (with Kai Schafft), Rural Retirement Migration (Springer, 2008) (with Nina Glasgow), Population Change and Rural Society (Springer, 2006) (co-edited), and Challenges for Rural America in the 21st Century (Penn State, 2003) (co-edited). He is past president of the Rural Sociological Society, was elected to the Executive Committee of the European Society for Rural Sociology, and as chair of the American Sociological Association’s Section on the Sociology of Development in 2015. He received the Distinguished Rural Sociologist Award from the Rural Sociological Society, the Chancellor’s Award for Sustained Professional Service from the State University of New York, and was awarded an honorary doctorate from Rousse University in Bulgaria in 2007 recognising his contributions to that university’s rural and regional development educational programmes.