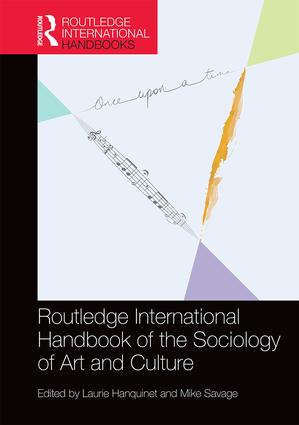 Routledge International Handbook of the Sociology of Art and Culture

The Routledge Handbook of the Sociology of Arts and Culture offers a comprehensive overview of sociology of art and culture, focusing especially – though not exclusively – on the visual arts, literature, music, and digital culture. Extending, and critiquing, Bourdieu’s influential analysis of cultural capital, the distinguished international contributors explore the extent to which cultural omnivorousness has eclipsed highbrow culture, the role of age, gender and class on cultural practices, the character of aesthetic preferences, the contemporary significance of screen culture, and the restructuring of popular culture. The Handbook critiques modes of sociological determinism in which cultural engagement is seen as the simple product of the educated middle classes. The contributions explore the critique of Eurocentrism and the global and cosmopolitan dimensions of cultural life. The book focuses particularly on bringing cutting edge ‘relational’ research methodologies, both qualitative and quantitative, to bear on these debates. This handbook not only describes the field, but also proposes an agenda for its development which will command major international interest.

The study of Art and Culture has been among the fastest growing fields of Sociology in recent years, and this Handbook both provides a timely and valuable overview and a serious intellectual engagement that will be of value to students and researchers alike. - Craig Calhoun, Director of the London School of Economics and Political Science, UK

"The editors of this book, who have organized its 30 chapters into three sections, have three aims: defend Bourdieu’s approach to cultural sociology; elaborate on a "relational" analysis of the sociology of art and culture; and emphasize that there are both quantitative and qualitative approaches to research on the culture of art…It is difficult to see any continuing argument or "flow of thought" emerging out of these diverse papers; at the same time, this is a strength of the book, in that readers are confronted with debate and hidden disagreements. Much of the book is words about words, which should be useful to students and researchers who work in the essayist style of the authors." - D. Harper, University of Rochester, CHOICE

1. Preface – The Handbook 2. Contemporary Challenges for the Sociology of Art and Culture: An Introductory Essay, Laurie Hanquinet and Mike Savage Part 1: Bourdieu’s Legacy and New Perspectives for the Sociology of Art and Culture 3. Introduction to Part One 4. The Sociology of Cultural Participation In France 30 Years After ‘Distinction,’ Phillipe Coulangeon 5. A Post-Bourdieusian Sociology of Valuation and Evaluation for the Field of Cultural Production, Stefan Beljean, Phillipa Chong, and Michèle Lamont 6. Contesting Culture: Bourdieu & the strong program in cultural sociology, Marco Santoro and Marco Solaroli 7. The Cultural Omnivore Thesis: Methodological aspects of the debate, Irmak Karademir Hazır and Alan Warde 8. After Omnivorousness: Is Bourdieu still relevant?, Omar Lizardo and Sara Skiles 9. A Critique of the Omnivore. From the origin of the idea of omnivorousness to the Latin American experience, Modesto Gayo 10. Age-Period-Cohort and Cultural Engagement, Aaron Reeve 11. A Social Aesthetics as a General Cultural Sociology?, John Levi Martin and Ben Merriman 12. Genre: Relational approaches to the sociology of music, Jennifer C. Lena 13. Networks and Culture, Alix Rule and Peter Bearman 14. Getting Beyond the Surface. Using geometric data analysis in cultural sociology., Henk Roose Part 2: The Fabric of Aesthetics 15. Introduction to Part Two 16. From Sociology of Culture to Sociology of Artistic Producers: How to Become a Contemporary Artist, Nathalie Heinich 17. Avant-garde Artworks, Artists and Mediators. A State of Relationships, Nuria Peist 18. Learning How to Think, and Feel, About Contemporary Art: An object relational aesthetic for sociology, Sophia Krys Acord 19. Museum Sociology, Volker Kirchberg 20. Adjusting Field Theory: The dynamics of settler-colonial art fields, Tony Bennett 21. The World Market of Translation in the Globalization Era: Symbolic Capital and Cultural Diversity in the Publishing Field, Gisèle Sapiro 22. The Biennalization of Art Worlds: the Culture of Cultural Events, Monica Sassatelli 23. Aesthetic Capital, Sylvia Holla and Giselinde Kuipers Part 3: The Complexity of Cultural Classifications 24. Introduction to Part Three 25. Cultural Dissonances: the Social in the Singular, Bernard Lahire 26. The Multiplicity of Highbrow Culture: Taste Boundaries Among the New Upper Middle Class, Guy Bellavance 27. ‘There’s something fundamental about what makes you laugh’. Comedy as an Aesthetic Experience, Sam Friedman 28. Middlebrow Book Culture, David Carter 29. Digital Sociology in the Field of Devices, Adrian Mackenzie, Richard Mills, Stuart Sharples, Matthew Fuller and Andrew Goffey 30. Researching Social Analytics: Cultural Sociology in the Face of Algorithmic Power, Nick Couldry 31. The Rising Power of Screens: Changing Cultural Practices in France, from 1973 to 2008, Olivier Donnat 32. The Structuration of Lifestyle in the City of Porto: A Relational Approach, Virgílio Borges Pereira 33. Contesting the Highbrow and Lowbrow Distinction: How Latin American Scholars Engage in Cross-Cultural Debates, María Luisa Méndez 34. When the Artistic Field Meets the Arts Worlds, Chao Zhang 35. Institutionalizing the Neo-Bohemia, Richard Lloyd

Laurie Hanquinet is a Lecturer in the Department of Sociology at the University of York. Her main fields of interest are sociology of culture and art as well as social sciences methodology. She has undertaken research on the visitors of modern and contemporary art museums, on the role of artists in the society and on different dimensions of cultural participation.

Mike Savage became Professor of Sociology at the LSE in September 2012, where he is active in leading the International inequalities Institute which began in 2015. Previously he was Professor at the University of Manchester, where he had been Director of the ESRC Centre for Research on Socio-Cultural Change (CRESC) from 2004 to 2010, and Professor at the University of York, where he founded the European Centre for Cultural Exploration from 2010-2012.