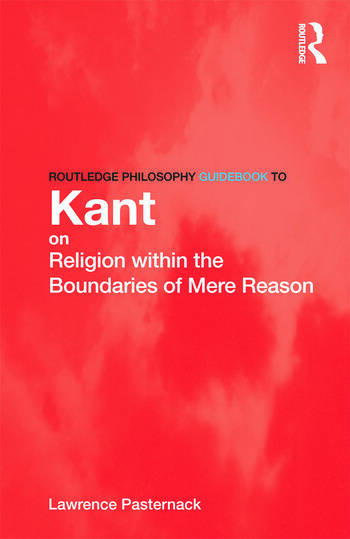 Throughout his career, Kant engaged with many of the fundamental questions in philosophy of religion: arguments for the existence of God, the soul, the problem of evil, and the relationship between moral belief and practice. Religion within the Boundaries of Mere Reason is his major work on the subject.

This book offers a complete and internally cohesive interpretation of Religion. In contrast to more reductive interpretations, as well as those that characterize Religion as internally inconsistent, Lawrence R. Pasternack defends the rich philosophical theology contained in each of Religion’s four parts, and shows how the doctrines of the "Pure Rational System of Religion" are eminently compatible with the essential principles of Transcendental Idealism. The book also presents and assesses:

Introduction  1. Faith, Knowledge, and the Highest Good  2.Religion’s Two Prefaces and the Moral Foundations of Pure Rational Faith  3. Part One of Religion: Good, Evil, and Human Nature  4. Part Two of Religion: The Change of Heart  5. Part Three of Religion: The Kingdom of God on Earth  6. Part Four of Religion: Authentic and Counterfeit Service to God  7. Conclusion.  Index

Lawrence R. Pasternack is Associate Professor of Philosophy at Oklahoma State University, USA. His work on Kant’s philosophy of religion appears in Kant-Studien, Faith and Philosophy, Religious Studies, and many other prominent venues.

"Lawrence Pasternack’s masterful commentary on Kant’s Religion within the Boundaries of Mere Reason achieves three important goals: first, it offers an original, plausible and unifying interpretation of Religion as a whole. Second, this unifying interpretation allows Pasternack to make the notoriously difficult Religion accessible to undergraduates. Third, it advances scholarly debate on several fronts, making it a must-have for philosophers and theologians working on Religion as well as for anyone teaching Religion. … [It] provides students a clear path through Religion while also in many ways greatly amplifying its intelligibility to scholars. Not only does it excel as a philosophically adept and comprehensive reading of Kant’s Religion, but it stands as one of the most significant contributions to Kant’s philosophy of religion to date." - Robert Gressis, Kantian Review

"If any doubts remain about the coherence and theological relevance of the arguments in Kant’s Religion, or their consistency with his other writings, this masterful study conclusively dispels them. Taking the recent affirmative interpretive trend to new heights, Pasternack shows how each part of Religion entails further developments of the Highest Good and its Postulates." - Stephen R. Palmquist, Hong Kong Baptist University

"A powerful response to a long tradition of scholarship that regards Religion within the Boundaries of Mere Reason as Kant's "capitulation" to traditional Christian teachings, and an abandonment of his Enlightenment rationalism. Pasternack demonstrates how Kant's development of a rational religious position is firmly anchored in the philosopher's earlier critical work, and shows how Kant unites autonomy and grace in his vision of human beings' moral fulfilment. Essential reading for students of one of the most important and enduring works of philosophical theology." - Ronald M. Green, Dartmouth College, USA

"Pasternack’s Guidebook… sheds light on many dark corners of one of Kant’s more difficult texts. Its strength is that it provides for each part of it a thoughtful and informed discussion with which a reader of Kant’s Religion can compare his or her own readings and reactions." - Allen Wood, Review from Critique, July 2015