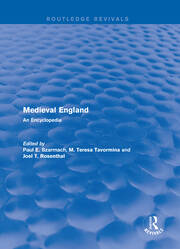 This wide-ranging text encompasses English social, cultural, and political life from the Anglo-Saxon invasions in the fifth century to the turn of the sixteenth century, as well as its ties to the Celtic world of Wales, Scotland and Ireland, the French and Anglo-Norman world of the Continent and the Viking and Scandinavian world of the North Sea. A range of topics are discussed from Sedulius to Skelton, from Wulfstan of York to Reginald Pecock, from Pictish art to Gothic sculpture and from the Vikings to the Black Death. A subject and name index makes it easy to locate information and bibliographies direct users to essential primary and secondary sources as well as key scholarship.

With more than 700 entries by over 300 international scholars, this work provides a detailed portrait of the English Middle Ages and will be of great value to students and scholars studying Medieval history in England and Europe, as well as non-specialist readers.