Rubens, Velázquez, and the King of Spain 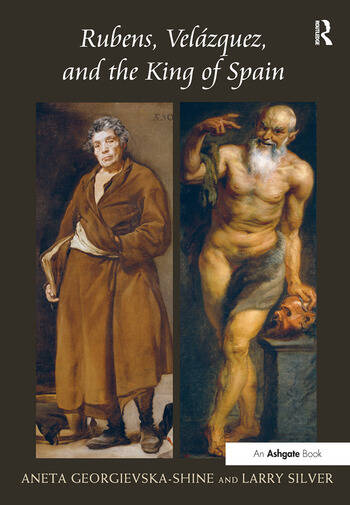 Rubens, Velázquez, and the King of Spain

This study provides a new analysis of the pictorial ensemble of the Torre de la Parada, the hunting lodge of King Philip IV of Spain. Created in the late 1630s by a group of artists led by Peter Paul Rubens, this cycle of mythological imagery and hunting scenes was completed by Diego Velázquez. Despite the lack of a written program, surviving works provide eloquent testimony of several basic themes that embody Neostoic ideals of self-restraint and prudent governance. While Rubens set the moral tone through his serio-comic Ovidian narratives, Velázquez added an important grace note with his portraits of ancient philosophers, and royals and fools of the court. This study is the first to consider in depth their joint artistic contributions and shared ambition. Through analysis of individual works, the authors situate these pictorial inventions within broader intellectual currents in both Spanish Flanders and Spain, especially in the advice literature and drama presented to the Spanish king. Moreover, they point to the lasting resonance of Torre de la Parada for Velázquez, especially within his late masterworks, Las Meninas and Las Hilanderas. Ultimately, this study illuminates the dialogical nature of this ensemble in which Rubens and Velázquez offer a set of complementary views on subjects ranging from the nature of classical gods to the role of art as a mirror of the prince.

Larry Silver is Farquhar Professor of Art History at the University of Pennsylvania, USA. He is a past President of the College Art Association and past Editor in Chief of caa.reviews. He has published numerous books, most recently Pieter Bruegel (2011) and The Essential Dürer (2010).

Aneta Georgievska-Shine is a lecturer in the Departments of Art History and Fine Arts at the University of Maryland, College Park, USA. She is also the author of Rubens and the Archaeology of Myth, 1610-1620 (Ashgate, 2009).

'This ambitious study deals with two of the most complex artists of the seventeenth century, who, moreover, represent two different artistic traditions. Habsburg myth making, the emblematic tradition, the mythographic tradition, and innumerable ancient texts are adduced by the authors to build a set of associative meanings around the mythological paintings created for the Torre de la Parada. The authors treat intention and reception with subtlety and deftness, and offer up a rich range of possible meanings for this intriguing pictorial ensemble.' Giles Knox, Indiana University, USA

'In this ambitious book, Aneta Georgievska-Shine and Larry Silver vividly portray Rubens' mythological protagonists not as heroic role models, but as sympathetic figures of flesh and blood. Drawing on Spanish and Netherlandish examples and literary sources, the authors convincingly show that the Torre paintings served both to delight viewers and to propagate the mythic origins and political ambitions of the Spanish Habsburgs. Learned, original and well argued, this study does justice to the complexity of mythological painting in the context of the seventeenth-century Spanish court.' Anna C. Knaap, Emmanuel College, USA

'... the authors have fashioned an encomium of Rubens's intellect and imagination that will give students much to think about.' The Art Newspaper

'... the full-length study by Aneta Georgievska-Shine and Larry Silver is most welcome because it takes Rubens’s and Velázquez’s relationship as its fulcrum. In examining this artistic dialogue within and beyond the Torre cycle, the authors compellingly attend to how these artists’ exchanges produced not only an ambitious painting cycle but also a court audience ready to embrace these paintings.' Historian of Netherlandish Art Review of Books

'Georgievska-Shine and Silver provide a compelling framework for interpreting the artistic contributions of Rubens and Velázquez to the Torre de la Parada. Sited as a locus of exchange between two eminent painters, the hunting lodge takes on renewed significance in their study, rewarding readers with an enriched understanding of its pictorial ensemble, and—significantly—of the conversation with Rubens that was to resound in Velázquez’s works. This elegant analysis is further proof that we gain deeper knowledge of artistic production in seventeenth-century Spain by situating it in dialogue with a wider European context.' CAA Reviews