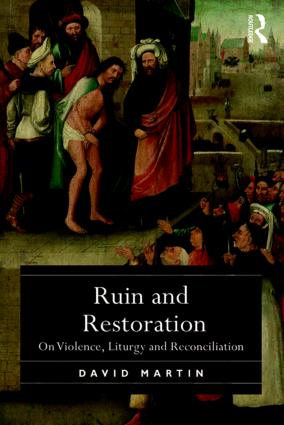 To suppose that God has a providential plan based on a special covenant with Israel and realised in the atonement presents us with a moral problem. In Ruin and Restoration David Martin sketches a radical naturalistic account of the atonement based on the innocent paying for the sins of the guilty through ordinary social processes. An exercise in socio-theology, the book reflects on the contrast between ’the world’ governed by the dynamic of violence as analysed by the social sciences, including international relations, and the emergence in Christianity (and Buddhism) of a non-violent alternative. A ’governing essay’ fuses frameworks drawn from Reinhold Niebuhr, Karl Jaspers, Ernst Troeltsch and Max Weber and explores the relation between the cultural sciences, especially sociology, and theology treated as another but very distinctive cultural science. Six commentaries then deal with the atonement in detail; with the nature of Christian language and grammar, and with its characteristic mutations due to necessary compromises with ’the world’; with sex and violence; and with the liturgy as a concentrated mode of reconciliation.

‘This is, quite simply, a remarkable book. It is highly original and provocative, while maintaining an unflinchingly empirical gaze on the brute reality of the world.’ - The Revd Duncan Dormor, Church Times

David Martin is Emeritus Professor of Sociology, LSE, UK, and Fellow of the British Academy. He was born in Mortlake, in 1929 and attended East Sheen Grammar School and Westminster College, In the latter part of a seven-year period in primary school teaching he took a first class (external) degree in sociology in his spare time and won a post-graduate scholarship to the LSE. He became a lecturer in the LSE sociology department in 1962 and professor from 1971-89. After his first book on Pacifism (1965) he produced the first critique of secularisation theory (1965) and the first statement of a general theory of secularisation (1969 and 1978). From 1986-90 he was distinguished professor of Human Values at Southern Methodist University and turned to the study of global Pentecostalism, producing, the first summary statement of the world-wide Pentecostal phenomenon in 1990. He also returned to the issue of religion and violence and explored issues in music and nationalism and sociology and theology. His intellectual autobiography The Education of David Martin appeared in 2013.