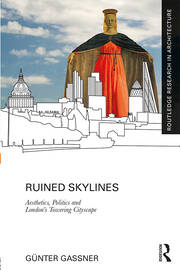 This book examines the skyline as a space for radical urban politics. Focusing on the relationship between aesthetics and politics in London’s tall-building boom, it develops a critique of the construction of more and more speculative towers as well as a critique of the claim that these buildings ruin the historic cityscape. Gassner argues that the new London skyline needs to be ruined instead and explores ruination as a political appropriation of the commodified and financialised cityscape. Aimed at academics and students in the fields of architecture, urban design, politics, urban geography, and sociology, Ruined Skylines engages with the work of Walter Benjamin and other critical and political theorists. It examines accounts of sometimes rebellious and often conservative groupings, including the City Beautiful movement, the English Townscape movement, and the Royal Fine Art Commission, and discusses tower developments in the City of London – 110 Bishopsgate, the Pinnacle, 22 Bishopsgate, 1 Undershaft, 122 Leadenhall, and 20 Fenchurch – in order to make a case for reanimating urban politics as an art of the possible.

The notion of the skyline

The skyline as a monad

History as a process

Günter Gassner is Lecturer in Urban Design at the School of Geography and Planning, Cardiff University, Wales, and an architect. His research and teaching interests lie at the intersection of critical theory and spatial practices. He specialises in questions about relationships between aesthetics and politics, history and power, and urban visions and visualisations.

"Günter Gassner makes a powerful case for complexity rather than clarity in cities. He explores the massing together of tall buildings, arguing for a critical and creative exploration of skylines rather than the privileging of individual structures. Though Gassner's work is based on architectural craft, it ranges deep into politics, philosophy, economics, and everyday life. Ruined Skylines is arousing visually, engaging to read, and never fails to provoke." – Richard Sennett, London School of Economics and Political Science, UK

"In this original and compelling study Günter Gassner dispels the idea of skylines as simple linear representations, to be traced or protected, or read for their obvious symbolic load. Through meticulous visual analyses and imaginative engagement with the work of Walter Benjamin and other key critical urban theorists, Ruined Skylines grounds London’s ‘new’ skyline within a longer historical trajectory. As an intervention within debates about urban change this timely work goes far beyond the surface controversies and straightforward readings of the tall-building boom and its relationship with power and capital. It offers, instead, a radical, multi-dimensional reconceptualization of the political uses and potentials of the skyline." – Ben Campkin, The Bartlett School of Architecture, University College London, UK

"Rich in both historical detail and theoretical insight, this is a particularly timely and significant book. As the hubris of contemporary transnational corporations finds ever more spectacular instantiation in the high-rise glass and steel of metropolitan skyscrapers, Günter Gassner astutely recognizes that the ‘choice’ between neoliberal tower-building boosterists and historical heritage naysayers is merely one between the two sides of the same conservative coin. Drawing on Walter Benjamin’s vision of ‘ruination’ as a process of fracturing deceptive facades and disturbing contexts to reveal unheeded possibilities and unrealized potentialities, Gassner’s pioneering ‘baroque critique’ deftly navigates towards a genuinely alternative political aesthetic and urban imaginary. Focusing on the London skyline, this book will inform and inspire those who reject the relentless commodification and financialisation of our cityscapes, and who are determined that our twenty-first-century cities will be neither the preserve of penthouse-dwelling economic elites nor museumified monuments maintained for globe-trotting tourists. Deeply critical and profoundly political, Gassner’s work is not just about architectural horizons and changing urban vistas; rather, it sets out to challenge and change the very processes and architects, the how and the who, the whys and wherefores, of present-day urban transformation. It is an urgent and necessary interrogation of how our future cities are to be(come) both liveable and alive." – Graeme Gilloch, Lancaster University, UK