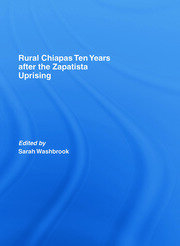 Considered the most significant recent agrarian movement in Mexico, the 1994 EZLN uprising by the indigenous peasantry of Chiapas attracted world attention. Timed to coincide with the signing of the NAFTA agreement, the Zapatista Army of National Liberation reasserted the value of indigenous culture and opposed the spread of neo-liberalism associated with globalization.

The essays in this collection examine the background to the 1994 uprising, together with the reasons for this, and also the developments in Chiapas and Mexico in the years since. Among the issues covered are the history of land reform in the region, the role of peasant and religious organizations in constructing a new politics of identity, the participation in the rebellion of indigenous women and changing gender relations, plus the impact of the Zapatistas on Mexican democracy.

This book was previously published as a special issue of The Journal of Peasant Studies.

1. Acknowledgements  2. Composite Glossary and Acronyms  3. Introduction – The Chiapas Uprising of 1994: Historical Antecedents and Political Consequences  4. The Zapatista Rebellion in the Context of Globalization  5. From Revolution to Transition: The Chiapas Rebellion and the Path to Democracy in Mexico  6. Indigenismo, Indianismo and ‘Ethnic Citizenship’ in Chiapas  7. Rural Chiapas Ten Years after the Armed Uprising of 1994  8. Land Reform, the State and the Zapatista Uprising in Chiapas  9. The Formation, Structure and Organisation of the ‘Armed Community in Rebellion’: The Construction of Neo-Zapatismo in the Tojolab’al Cañadas (1988-1996)  10. Subordination and Rebellion: Indigenous Women in Chiapas Ten Years after the Zapatista Uprising  11. Suffering for Justice in Chiapas: Religion and the Globalization of Ethnic Identity  12. Who Needs Zapatismo? State Interventions and Local Responses in Marqués de Comillas  13. Neoliberalism and the Rise of (Peasant) Nations within the Nation: Chiapas in Comparative and Theoretical Perspective  14. Abstracts