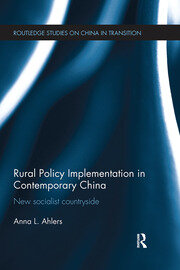 At the turn of the millennium, the disparities between rural and urban livelihoods, underdevelopment and administrative shortcomings in the Chinese countryside were increasingly seen as posing a manifest threat to social harmony and economic and political stability. At that time the term "three rural problems" (sannong wenti) was coined which defined the main issues of rural life that needed to be targeted by government action: agriculture (nongye), villages (nongcun) and farmers (nongmin). In turn, with the launch of the 11th Five-Year Plan in 2006, a pledge was made to shift the focus of developmental efforts to the long-neglected countryside, which is still home to half of the Chinese population.

This book presents an analysis of adaptive local policy implementation in China in the context of the "Building of a New Socialist Countryside" (BNSC) policy framework. Based on intensive field work in four counties in Fujian, Jiangxi, Shaanxi and Zhejiang Provinces between 2008 and 2011, it offers detailed analyses of the form and impact of county governments’ strategic agency at certain stages and within certain fields of the implementation process (for example, the design of local BNSC programs, the steering of project funding, implementation and evaluation, the establishment of model villages and the management of public participation). Further, this study illustrates that BNSC is far more than the ‘empty slogan’ described by many observers when it was launched in 2005/2006. Instead, it has already brought about considerable shifts in terms of the process and outcomes of rural policy implementation. Altogether, the results of this research challenge existing paradigms by showing how, against the background of contemporary approaches to rural development and recent reforms initiated by the central state, local bureaucracies’ strategic agency can actually push forward effective – albeit not necessarily optimal – policy implementation to some extent, which serves the interests of central authorities, local implementors and rural residents.

By tying into the larger debates on China's state capacity and authoritarian adaptability, this book enriches our understanding of the inner workings of the Chinese political system. As such, it will prove invaluable to students and scholars of Chinese politics, public policy and development studies more generally.

Anna L. Ahlers is a Postdoctoral Fellow at the "Forum Internationale Wissenschaft", University of Bonn, Germany.