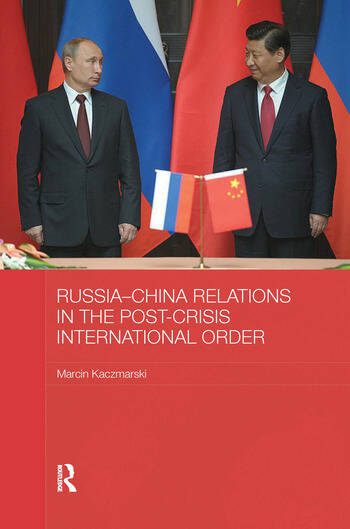 The book explores developments in Russia-China relations in the aftermath of the global economic crisis, arguing that the crisis transformed their bilateral affairs, regional liaisons and, crucially, altered the roles both states play on the international arena. Discussing how Russo-Chinese cooperation has accelerated in energy trade, arms sales and in the Russian Far East, the focus is on how the still mutually advantageous relationship has become more asymmetric than ever, reflecting China’s meteoric rise and Russia’s decline. These dynamics are explored through three perspectives: domestic, regional and global. Domestically, the book traces the role of political coalitions and key interest groups involved in how the two states shape their reciprocal policies. Changes in the regional dimension are examined with particular reference to a new status quo emerging in Central Asia. The book concludes by explaining how the changing relationship is affecting the international order, including the balance of power vis-à-vis the United States as well as Russia and China’s changing attitudes towards global governance.

Marcin Kaczmarski is a Lecturer at the Institute of International Relations at the University of Warsaw, Poland

"Marcin Kaczmarski of the University of Warsaw offers a succinct and comprehensive review of the Russia–China relationship since the 2008 global economic crisis, concluding that it is no longer an ‘axis of convenience’"

"The Sino-Russian relationship has featured numerous twists and turns over the century since revolutions transformed the domestic politics and foreign policies of both countries.  Today, ongoing changes in China and Russia, and at the global level, are creating an opportunity for innovative analysis of the relationship between these two major powers. Marcin Kaczmarski’s account meets that need well."

"Kaczmarski delicately confronts the two narratives on Russian-Chinese relations: the official-optimistic one of a "strategic partnership" and the academic-pessimistic narrative of Bobo Lo's "axis of convenience". Although it is difficult to say whether Kaczmarski's approach is a better way to understand Russo-Chinese relations, it is undoubtedly a good sign that a new voice has appeared in the debate."

"This book delves into critically significant issues, as it investigates the various aspects of relations between the two regional powers at regional and global level in their interaction (and confrontation at other times) with the West and the United States […] this can be rated as one of the most complete and more updated works in the field of Sino–Russian relations"

"Kaczmarski’s analysis not only illuminates the patterns and practices of Russia’s and China’s foreign policies, but also radically alters the dominant frameworks within which the debate on their interactions tends to be positioned. What emerges is a far more sophisticated and nuanced narrative of the multiplicity, contingency and unpredictability of Chinese international agency on the world stage."

"Marcin Kaczmarski tackles the puzzle of why a declining Russia has accommodated China's rise, rather than seeking to balance a potential challenger as realist theory would predict, and why an increasingly powerful China has exercised restraint in its relations with Russia [...] Russian backing for China's assertive posture in the Asia-Pacific reinforces Kaczmarski's narrative of a gradual accommodation to Chinese preeminence."