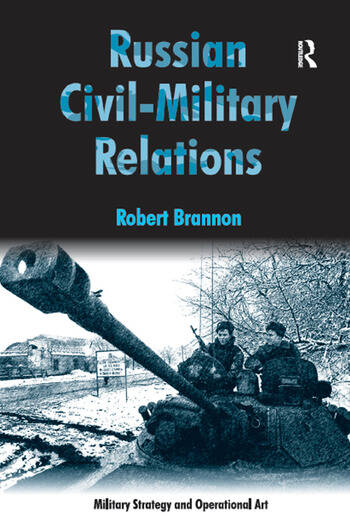 Putin's style of leadership has transitioned into another era but there is much still inherited from the past. In the often anarchic environment of the 1990s, the nascent Russian Federation experienced misunderstandings and mis-steps in civil-military relations. Under Boris Yeltsin it has been questioned whether the military obeyed orders from civilian authorities or merely gave lip service to those it served to protect while implementing its own policies and courses of action. Robert Brannon sets forth the circumstances under which the military instrument of Russia's power and influence could be called upon to exert force. Deriving in part from its Soviet past, the author examines how Russia's military doctrine represents more than just a road map of how to fight the nation's wars; it also specifies threats to national interests, in this case the United States, NATO and international terrorism. Against this background of politics and power, the military's influence may reveal as much about politics as it does the military.

'Comes at just the right time. An important work that answers vital questions about Russian motives and military actions today'. James Howcroft, United States Marine Corps 'At a time of global economic crisis and sharply changing international relationships, Brannon's perceptive evaluation of civilian-military relations within the Russian Federation permits readers to develop a clearer and more profound appreciation of the challenges faced by the United States and its Western Allies as they face the uncertainties of the future.' David M. Glantz, The Citadel, Charleston, USA 'Robert Brannon has produced an insightful, concise account of the evolution of civil-military relations in post-Soviet Russia. He draws well on the theoretical literature on civil-military relations and carefully shows how and to what extent civilian authority was actually exercised over Russia's armed forces in the decade after the Soviet regime collapsed. This book is a valuable contribution to the literature and will be very useful for courses on Russian politics and on civil-military relations.' Mark Kramer, Harvard University, USA 'Robert Brannon has written an excellent book on civil-military relations in post-communist Russia. Linking civilian control to national security policy, military doctrine and performance, Brannon’s nuanced analysis reaches beyond the political narrative of his case studies to explore the fundamentals of the process. Erudite, subtle and well-written, the book is a must read for anyone interested in post-communist transitions and civil-military relations in general.' Andrew A. Michta, George C. Marshall European Center for Security Studies, Germany '...this book is an important contribution to the literature on civil-military relations in Russia, is very well written, and contains a great deal of useful information. The book is also particularly useful in that it contains the full texts of all of the Russian national security documents from 199