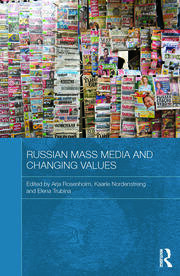 This book provides a multi-faceted picture of the many complex processes taking place in the field of contemporary Russian media and popular culture. Russian social and cultural life today is strongly individualised and consumers are offered innumerable alternatives; but at the same time options are limited by the new technologies of control which are a key feature of Russian capitalism. Based on extensive original research by scholars in both Russia itself and in Finland, the book discusses new developments in the media industry and assesses a wide range of social and cultural changes, many of which are related to, and to an extent generated by, the media.

The book argues that the Russian mass media industry, whilst facing the challenges of globalization, serves several purposes including making a profit, reinforcing patriotic discourse and popularizing liberalized lifestyles. Topics include changing social identities, new lifestyles, ideas of "glamour" and "professional values". Overall, the book demonstrates that the media in Russia is far from homogenous, and that, as in the West, despite new technologies of control, media audiences are being offered a new kind of pluralism which is profoundly influencing Russia's cultural, social and political landscape.

Comments: This book on the Russian TV is largely written from a perspective of cultural studies. This is very close to the approach some authors in our book have chosen, but the book edited by Beumers et al. is methodologically more unified, while our book has more different approaches.   However, the juxtaposition of two perspectives of mass media, the quantitative one, as developed by traditional mass media and communication studies, and the one of cultural studies, is valuable since it represents collisions among researchers and lecturers characteristic for almost any journalism department.

Comments: This is a very fine book based on a substantial field research that successfully demonstrates an extent to which politics and culture are intertwined in the present-day Russia. The fact that we’ve tried to cover not only TV but print media as well is, we think, our advantage.

Comments: This is one of the first monographs devoted to the post-Soviet mass media. The editors claim that it is only when collective of researchers deals with such complicated topic the chances are high that a result will be successful. The book is certainly successful. However, we think that it is written mostly from a perspective of an "old school" of mass media research while new perspectives, including the one of cultural studies, are left out.

Comments: This book compares the approaches to the media in Russia developed by the Western and Russian researchers. The book claims that while the former is still significantly affected by the "Cold War" stereotype, the latter is able to provide a detail map of the Russian mass media industry which is drawn, mainly, on the basis of available statistics and sociological polls. Our perspective is different: we believe that there is no need any longer to oppose so drastically the Western and Russian intellectuals’ understanding of mass media. Moreover, statistics and polls are not enough to make sense of complex and often subtle changes that media both create and reflect on.