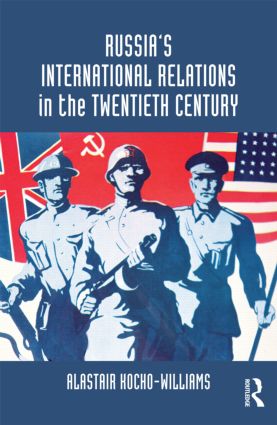 Russia has long been a major player in the international relations arena, but only by examining the whole century can Russian foreign policy be properly understood, and the key questions as to the impact of war, of revolution, of collapse, the emergence of the Cold War and Russia’s post-Soviet development be addressed.

Surveying the whole of the twentieth century in an accessible and clear manner Russia’s International Relations in the Twentieth Century provides an overview and narrative, with analysis, that will serve as an introduction and resource for students of Russian foreign policy in the period, and those who seek to understand the development of modern Russia in an international context.

An essential resource for students of Russian history and International policy.

"Russia's International Relations in the Twentieth Century is an important guide to understanding the past and present - and to contemplating the future - of Russian foreign policy. Comprehensive in its coverage, summing up recent scholarship on Soviet policies in Europe, Alastair Kocho-Williams documents the continuities in Russia's foreign policy throughout its tumultuous twentieth century: its alliances based on common enemies rather than common values; its simultaneous position as an Asian, European and even a global power; and its use of economic, ideological, and military tools in addition to diplomatic ones." - David C. Engerman, Brandeis University, USA

"…Alastair Kocho-Williams provides a succinct and detailed account of Russian and Soviet foreign policy, highlighting continuity and change over the period. This book is short, informative and is an indispensable resource for students…an excellent and informative resource for students of Russian and Soviet history." - Peter Whitewood, York St John University, UK