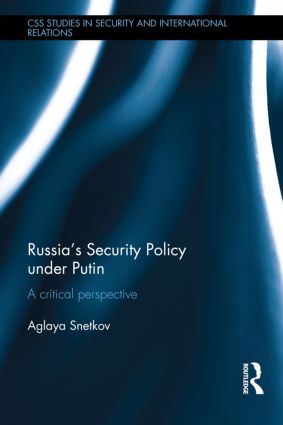 This book examines the evolution of Russia’s security policy under Putin in the 21st century, using a critical security studies approach.

Drawing on critical approaches to security the book investigates the interrelationship between the internal-external nexus and the politics of (in)security and regime-building in Putin’s Russia. In so doing, it evaluates the way that this evolving relationship between state identities and security discourses framed the construction of individual security policies, and how, in turn, individual issues can impact on the meta-discourses of state and security agendas. To this end, the (de)securitisation discourses and practices towards the issue of Chechnya are examined as a case study.

In so doing, this study has wider implications for how we read Russia as a security actor through an approach that emphasises the importance of taking into account its security culture, the interconnection between internal/external security priorities and the dramatic changes that have taken place in Russia’s conceptions of itself, national and security priorities and conceptualisation of key security issues, in this case Chechnya. These aspects of Russia’s security agenda remain somewhat of a neglected area of research, but, as argued in this book, offer structuring and framing implications for how we understand Russia’s position towards security issues, and perhaps those of rising powers more broadly.

This book will be of much interest to students of Russian security, critical security studies and IR.

Snetkov’s monograph, based on a PhD dissertation at the University of Birmingham, provides a close reading of Russian security discourse from 1999–2014 through the prism of Chechnya. The author carefully documents how the Russian leadership switched from a frame of a “weak state” to a “strong state” before edging back toward a discourse of an embattled state threatened by external enemies—and their domestic collaborators—a theme that emerged by 2004.

Aglaya Snetkov’s monograph largely resolves many of these complexities through a variety of analytical techniques. She sets forth a convincing periodisation of Russia’s security pathways from the time Vladimir Putin was appointed prime minister in 1999 to the key caesurae of Russia’s annexation of Crimea in 2014. She includes a running case study of Chechnya as an object of Russia’s security policies and discourses over this timeframe, thereby mitigating the pitfall of adopting an overly conceptual approach to the subject. In addition, in her comprehensive analytical framework she is attentive to desecuritisation processes, which are most clearly reflected in Chechnya’s evolution from state-breaker to state-maker… Snetkov’s volume provides a rich investigative agenda for the Russian security specialist.

Aglaya Snetov is Senior Researcher, Center for Security Studies, ETH Zurich, Switzerland, and has a PhD in Russian and East European studies from the University of Birmingham.

The CSS Studies in Security and International Relations examines historical and contemporary aspects of security and conflict. The series provides a forum for new research based upon an expanded conception of security and will include monographs by the Center's research staff and associated academic partners.