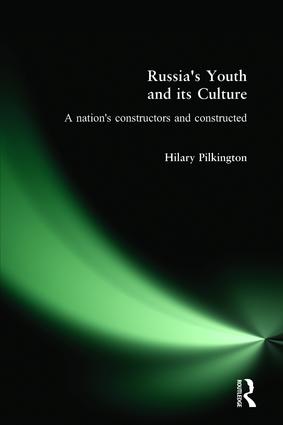 Russia's Youth and its Culture

Since the political whirlwinds of the mid-1980s and the fall of communism in 1991, Russia has undergone dramatic social change, much of which has escaped the attention of Western media.

In her new book, Hilary Pilkington applies the methods of cultural studies research to the study of Russian youth. She does this by `deconstructing' the social discourses within which Russian youth has been constructed and by providing an alternative reading of youth cultural activity, based on an ethnographic study of Moscow youth culture at the end of the 1980s.

The book also charts the passage of western youth cultural studies in the twentieth century and suggests some new ways forward in the light of the Russian experience. Hilary Pilkington traces the cultural themes of youth culture in the Anglo-American tradition and within the Soviet Union, before examining the impact of perestroika on the media and its ramifications for the discussion of youth. The book ends with a study of young people in Moscow and youth cultural groups; the product of field work and interviews in the city.

`Pilkington starts out with better credentials than almost all other Western and Russian researchers (who are largely middle-aged men) into Russian youth culture: she is young, punkish and au fait with modern youth culture. Add to that her fluent Russian, solid knowledge of Russian society cultural theories in East and West, and the reader is faced with a unique phenomenon - a book written from the scholarly perspective of a Western sociologist and by someone who is as much nasha ("one of us") to Russian as to Western youth groups. Her study is all the more authoritative in that its final section is based on two periods of fieldwork in Moscow during which she tusovala ("hung out") with various youth groups, particularly the stilyagi, experiences harnassed to painstaking ethnographic information gathering …. the book will long be quoted as an enriching and seminial work on the study of youth culture.' - James Riordan, Europe-Asia Studies

`It is an essential book for all students of youth culture, whether they have a particular interest in Russia or not. … As an example of how an exploration of youth culture can be the centre of a wider social study of a historical period, Pilkington's book must be judged very highly.' - Young People Now

`Pilkington's enthusiasm for her subject and her mastery of cultural/ethnographic approaches shine through and so the reader gains a rare insight into what makes Russian youth tick.' - Christopher Williams, Education in Russia, the Independent States and Eastern Europe