Russo-Japanese Relations, 1905-17
From enemies to allies 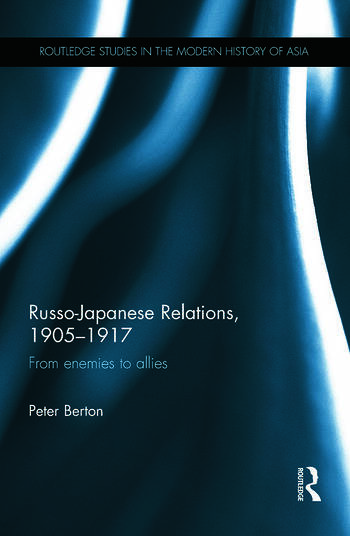 Russo-Japanese Relations, 1905-17: From enemies to allies

One surprising outcome of the Russo-Japanese War of 1904–1905 was that, although Russia was humiliatingly defeated, by 1916 Russia and Japan had become allies. This book provides a detailed analysis of how this remarkable turnaround came about. It traces the evolution of relations between the two powers through the conclusion of three public and secret agreements in 1907, 1910, and 1912, and the controversial secret alliance of 1916. The book argues that careful examination of complete records of negotiations from both sides definitively proves the case for Germany, not the United States, as the target of the secret treaty. Based on meticulous examination of documents in both Russian and Japanese foreign policy archives, it charts diplomatic developments, explores how Japanese and Russian thinking evolved, and assesses the wider international impact of the new alliance.

"Russo–Japanese Relations, 1905–1917 offers the best and virtually only available overview of Russo–Japanese relations during the final years of Tsardom and while Japan began crystallizing its craving for territorial control in East Asia. It also provides a perceptive analysis of the bilateral motives for the rapid and unexpected recovery of these relations based on a large array of Japanese and Russian primary sources. For these reasons alone the book is going to be the standard work on this topic for years to come. Moreover, it is highly recommended to anyone dealing with Russian, Japanese, and East Asian modern history, as well as for those interested in the sources of World War I and in the mechanisms underlying international treaties and alliances in modern times." - Rotem Kowner, Professor of Japanese History and Culture, University of Haifa; The Israel Journal of Foreign Affairs VI : 2 (2012)

"For anyone with a passing interest in the history of Japanese diplomacy, Berton’s monograph is already a minor classic... This brief but pithy volume is a valuable new resource for students of early twentieth-century diplomacy and World War I alike." - FREDERICK R. DICKINSON, University of Pennsylvania; AMERICAN HISTORICAL REVIEW DECEMBER 2012

"a valuable contribution" - Dr. D. B. Pavlov, Institute of Russian history at the Russian Academy of Sciences 1st issue in 2013

"[Berton] does well to outline the specific in his study of the Russo–Japanese Alliance of 1916. [...] Berton has appended virtually every agreement concluded by the Japanese and the Russians mentioned in the book. This collection of treaties is a welcome addition to any interested diplomatic historian looking at the history and treaties of the First World War. Furthermore, Berton has included earlier drafts of some of the agreements. This addition is perhaps the most valuable portion of the book due to these primary sources being collected in one place and reprinted in their entirety." – Oleksa Drachewych, McMaster University, Revolutionary Russia, 2014, Vol.27, No. 1, 67-89