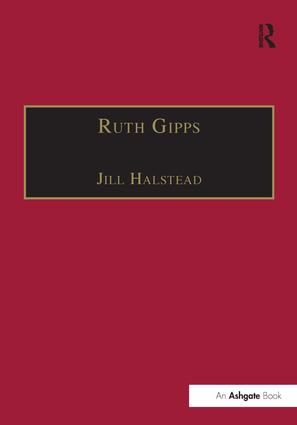 When Ruth Gipps died in 1999, her legacy was as one of Britain's most prolific female composers. Her creative output spanned some seventy years and includes symphonies, tone poems, concertos, string quartets and various large-scale choral and chamber works. Not content with her creative activities, her boundless energy fuelled her other roles as conductor, concert pianist, orchestral musician and pedagogue. Her many talents were acknowledged but not always respected and she was a figure often dogged by controversy. She gained a reputation for being uncompromising both personally and musically, a reputation that was ultimately to leave her isolated. In the first major review of her life and work the importance of Ruth Gipps is established in two ways: first, as a pioneering woman composer and conductor whose work challenged prevailing attitudes in the era directly after the war and second, as a composer whose musical philosophy was often at odds with mainstream thinking. Although she was branded a reactionary, her position reveals a number of important counter currents in English musical life in the twentieth century. The first section of the book documents her formative years, her life as child prodigy, the disruption and opportunities offered by war, the dramatic end of her career as a concert pianist and her subsequent entry into the world of conducting. The influence of key figures such as Vaughan Williams, Arthur Bliss, Malcolm Arnold and George Weldon is explored, as is Gipps's habitually thorny relationship with a range of musical institutions including the BBC and the City of Birmingham Symphony Orchestra. In the second part of the book her compositional output is reviewed. Works are explored via the guiding themes of her creative agenda; namely anti-modernism and Englishness. The book closes with an analysis of a group of works which all have gendered narratives or readings. As Gipps regularly used personal experience as the basis for such musical narratives, these works provide an intimate insight into this fascinating and complex woman.

'This is one of those rare books that combines academic rigour and scholarship with the kind of lucidity that makes engaging bed-time reading. Halstead's broad sweep on the fascinating life of this one woman encompasses all the major themes of trial and challenge that have dogged women musicians, and especially composers, for centuries.' Professor Lucy Green, Institute of Education, University of London, UK 'Halstead's book left me impatient to hear more of Gipps's music… It is a book that will become a key text in British Music Studies, both for Halstead's level headed assessment of Gipps's life and work and for her lucid discussion of so much that is interesting and important in trying to understand the wider issues facing the study of British music and musical life in the 20th century.' North American British Music Studies Association ’Halstead's discussion of the music is lively, accessible and leaves the reader wishing that more of Gipps' music were available on recordings… What Halstead does is present the facts in a clear, engaging manner that make Ruth Gipps come to life on the pages.’ The Delian ’Interesting and valuable as the gender and personality issues are in portraying a human being and in putting her life in the context of its time, the real need is to get to grips with her music. Jill Halstead's book is a fantastic start.’ Tempo

Jill Halstead is Senior Lecturer at The Grieg Academy, University of Bergen, Norway.