SBAs for the MRCS Part A: A Bailey & Love Revision Guide 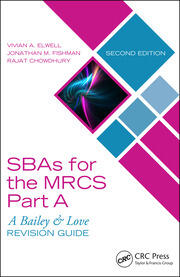 SBAs for the MRCS Part A: A Bailey & Love Revision Guide

changes to the MRCS Part A Examination. The second edition of this popular book,SBAs and EMQs for the MRCS Part A is an invaluable guide to sitting and passing the new MRCS examination.There is an increased emphasis on Anatomy and Basic Sciences,which now account for 60% of the exam.

College-approved,systematic and coherent questions for all the main systems are included, providing comprehensive coverage of the curriculum. The Question and Answer format, including many more Single Best Answers aids revision.Expanded to reflect the new 2017curriculum

Vivian A Elwell, BA Hons., MA (Cantab.), MBBS, MRCS, FRCS (Neuro. Surg.) is a consultant neurosurgeon and spinal surgeon at the Brighton and Sussex University Hospitals NHS Trust. She has a special interest in complex spinal surgery. She obtained her bachelor’s degree in biological sciences from Columbia College, Columbia University (New York City, NY), and obtained her master’s degree from the University of Cambridge. She obtained a Bachelor of Medicine and Bachelor of Surgery from the Imperial College School of Medicine, London.

Mr Fishman has extensive teaching experience and is the primary author of three undergraduate and three postgraduate medical textbooks, including the highly successful History Taking in Medicine and Surgery (Pastest Publishing), now in its 3rd Edition. He spent part of his medical training at both Harvard University and the NASA Space Center, USA.

He was awarded the ‘Royal Society of Medicine-Wesleyan Trainee of the Year’ Award in 2012 across all specialties and has been awarded the highly prestigious title of ‘Lifelong Honorary Scholar’ by the University of Cambridge, for academic excellence. He has been awarded a fellowship from the British Association of Plastic Surgeons for research at NASA, and from Cambridge University for research at Harvard University.

Jonathan has received personal research fellowships from the Academy of Medical Sciences, The Medical Research Council, Sparks Children's Charity, the Royal College of Surgeons of England, the UCL-Berkeley Award Scheme and the UCL-MRC Centenary Award Scheme. He was awarded a PhD from University College London in 2013 and is currently Honorary Clinical Lecturer at UCL. He is committed to a career in academic ENT, with a strong emphasis on teaching, research and career development.

Rajat Chowdhury, BSc (Hons), MA (Oxon), BM BCh (Oxon), MRCS, FRCR, FBIR, PGCME is a consultant musculoskeletal radiologist at Oxford University Hospitals, a Member of the Royal College of Surgeons and a Fellow of the Royal College of Radiologists. He was awarded an undergraduate Honours degree from University College London, and read medicine at Oxford University. He completed his clinical training at Oxford, Mayo Clinic and Harvard University. He then trained on the surgical rotation at St Mary’s Hospital, Imperial College, London, and held posts in accident and emergency, orthopaedics and trauma, cardiothoracic surgery, general surgery, and plastic surgery. He then trained in radiology before subspecialising in musculoskeletal radiology, completing his fellowship at Chelsea and Westminster Hospital and an honorary fellowship at the Nuffield Orthopaedic Centre, Oxford.