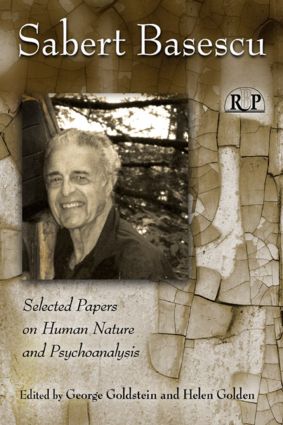 An influential part of the New York psychoanalytic scene for more than 50 years, Sabert "Sabe" Basescu is regarded as an outstanding analyst and a significant proponent of the integration of existentialism and phenomenology into psychoanalytic theory and practice. Existential themes serve as a central hub, a crossroads or meeting place for a variety of contemporary psychoanalytic approaches. Basescu was ahead of his time in anticipating these current trends – his teaching and writing were significant in the genesis of the relational turn as well as the ongoing development of the interpersonal tradition, thus it seems fitting that contemporary analysts remember him now.

To that end, this book comprises a selection of seven of Sabe’s articles, written across his career and exploring such issues as self-disclosure in the therapy session, the origins of creativity, and even his own anxieties as an analyst. Preceding each original paper is a thoughtful commentary by a different member of the contemporary psychoanalytic community, providing theoretical and clinical as well as personal context for Sabe’s work. Opening with an introduction that contextualizes the existential and phenomenological influences in psychoanalysis and closing with a heartfelt afterword by Sabe’s wife, this book is a fitting tribute to a man who is known for his warm, engaging demeanor even through the misfortunes of his elder years, and whose legacy in the field still resonates through contemporary voices.

"This much-deserved tribute to Sabe Basescu is, in its own right, a valuable addition to the literature. His lucid and erudite articles attest to Basescu's status as a pre-eminent (existential/humanistic) theoretician and consummate clinician. But above all, what permeates both his papers - as well as the introductions of the very caring and incisive commentators - is the clear sense of Basescu's being-in-the-world, the warmth, authenticity and integrity that has captured the admiration and love of his colleagues, students, and analysands." - Edgar A. Levenson, M.D., Training and Supervisory Analyst, William Alanson White Institute

"This landmark volume is a gift to therapist's everywhere. The combination of Sabert Basescu's highly original and profoundly important essays and the illuminating commentaries of the discussants has created a book that is a treasure of clinical wisdom. By bringing Basescu's contributions to a wider audience, the editors have done an invaluable service for our field." - Theodore Jacobs, M.D., Training and Supervising Analyst, NYU Postdoctoral Program in Psychotherapy and Psychoanalysis

Goldstein & Golden, Preface. Katz, Introduction: Existentialism and Phenomenology. Hoffman, Anxieties in the Analyst: An Autobiographical Account (1977). Aron, Behind the "Seens": The Inner Experience of at Least One Psychoanalyst (1987). Hirsch, The Therapeutic Process (1988). Menaker, Battered, Bothered and Bewildered: The Daily Life of an Analyst (1995). Orfanos, Creativity and the Dimensions of Consciousness (1967). Stern, Human Nature and Psychotherapy (1961). Adler, Farber, Skolnick, & Whitson, Tools of the Trade: The Use of the Self in Psychotherapy (1990). Glennon, Afterword. Bibliography of Sabert Basescu.

Helen Golden, Ph.D., is faculty and supervisor at the Westchester Center for the Study of Psychoherapy and Psychoanalysis.