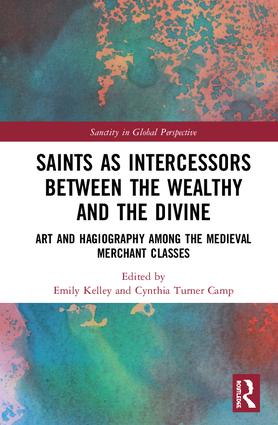 Saints as Intercessors between the Wealthy and the Divine

Art and Hagiography among the Medieval Merchant Classes, 1st Edition

Offering snapshots of mercantile devotion to saints in different regions, this volume is the first to ask explicitly how merchants invoked saints, and why. Despite medieval and modern stereotypes of merchants as godless and avaricious, medieval traders were highly devout – and rightly so. Overseas trade was dangerous, and merchants’ commercial activities were seen as jeopardizing their souls. Merchants turned to saints for protection and succor, identifying those most likely to preserve their goods, families, reputations, and souls.

The essays in this collection, written from diverse angles, range across later medieval western Europe, from Spain to Italy to England and the Hanseatic League. They offer a multi-disciplinary examination of the ways that medieval merchants, from petty traders to influential overseas wholesalers, deployed the cults of saints. Three primary themes are addressed: danger, community, and the unity of spiritual and cultural capital. Each of these themes allows the international panel of contributors to demonstrate the significant role of saints in mercantile life.

This book is unique in its exploration of saints and commerce, shedding light on the everyday role religion played in medieval life. As such, it will be of keen interest to scholars of religious history, medieval history, art history, and literature.

3 The Sunday Saint: Keeping a Holy "Merchant’s Time" in the Middle English Life of Erasmus

4 Birgitta of Sweden and the Merchant Classes of Lübeck

5 For the Hope of Salvation and the Honor of Family: Merchant Devotional Concerns in Early Sixteenth-Century Burgos.

6 For Salvation or Reputation? The Representation of Saints in a Jouvenel des Ursins Book of Hours

7 Spaces and Times for Worship: Merchant Devotion to the Saints in Late Medieval Barcelona

10 Success, Salvation, and Servitude: Tallinn’s Brotherhood of the Black Heads and its Relationship with Local and Regional Saint Cults

11 Reanimating the Power of Holy Protectors: Merchants and their Saints in the Visual Culture of Medieval and Early Modern Venice

Emily Kelley is Associate Professor of Art History in the Art Department at Saginaw Valley State University in Michigan, USA. Her research focuses on mercantile patronage and representations of saints’ lives in fifteenth- and sixteenth-century Spanish art. She is co-editor of two books, Binding the absent body in medieval and modern art: Abject, virtual, and alternate bodies (2016) and Mendicants and merchants in the medieval Mediterranean (2013).

is Associate Professor of English at the University of Georgia, USA. She specializes in English saints’ lives, manuscript studies, and medieval historiography. Her 2015 monograph, Anglo-Saxon saints’ lives as history writing in late medieval England, argues for the centrality of narratives of Anglo-Saxon saints in the late medieval rethinking of a shared English religious history.

Published under the aegis of The Hagiography Society, this series is dedicated to exploring the concept of sanctity in literary, artistic, ideational, and sociohistorical dimensions. ‘Sanctity in Global Perspective’ publishes monographs and edited volumes that illuminate the lives of saintly figures, the communities dedicated to those figures, and the material evidence of their cults. Our aim is to foster critical scholarship that offers novel conceptualizations and the possibility of crosspollination of ideas across traditions, geographical regions, and academic disciplines. The series is open to all areas of scholarship, without restriction as to religious traditions or time periods.