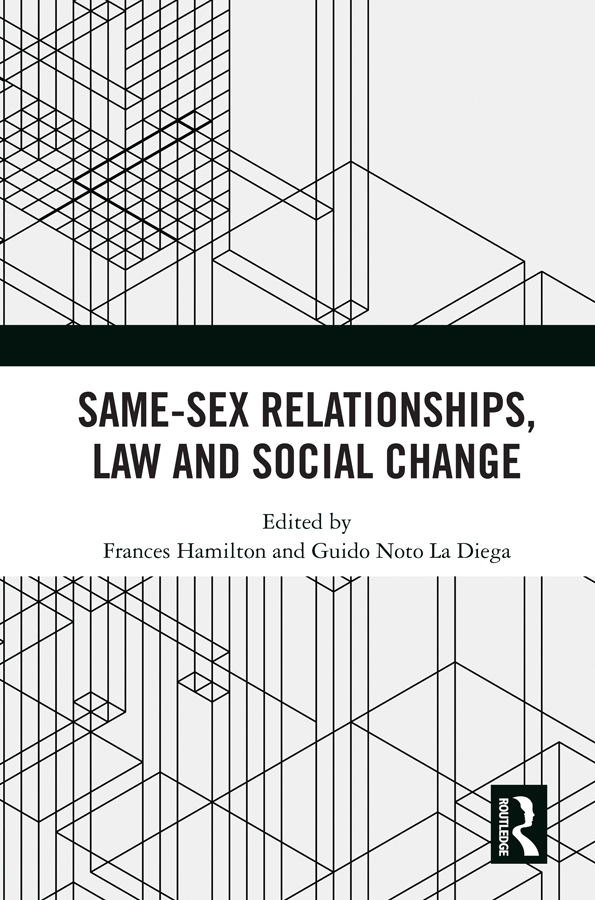 This edited collection provides a forum for rigorous analysis of the necessity for both legal and social change with regard to regulation of same-sex relationships and rainbow families, the status of civil partnership as a concept and the lived reality of equality for LGBTQ+ persons.

Twenty-eight jurisdictions worldwide have now legalised same-sex marriage and many others some level of civil partnership. In contrast other jurisdictions refuse to recognise or even criminalise same-sex relationships. At a Council of Europe level, there is no requirement for contracting states to legalise same-sex marriage. Whilst the Court of Justice of the European Union now requires contracting states to recognise same-sex marriages for the purpose of free movement and residency rights, unlike the US Supreme Court, it does not require EU Member States to legalise same-sex marriage. Law and Sociology scholars from five key jurisdictions (England and Wales, Italy, Australia, Canada, and the Republic of Ireland) examine the role of the Council of Europe, European Union and further international regimes. A balanced approach between the competing views of critically analytical rights based theorists and queer and feminist theorists interrogates the current international consensus in this fast moving area. The incrementalist theory whilst offering a methodology for future advances continues to be critiqued. All contributions from differing perspectives expose that even for those jurisdictions who have legalised same-sex marriage, still further and continuous work needs to be done.

The book will be of interest to students and scholars in the field of human rights, family and marriage law and gender studies.

Union in Relation to the Treatment of Same-Sex Couples’ Relationships:

Chapter 1: ‘The Potential of European Union Law to Further Advance LGBTQ+ Persons and Same-Sex Couples’ Rights and the Resulting Consequence of Brexit.’

Chapter 3: ‘Harmonisation of Choice of Law Rules on Same-Sex Marriage: An International Perspective.’

Chapter 4: ‘Marriage Equality via Referendum in Ireland: A Politically Opportune Route to Recognition?’

Chapter 5: ‘The Aftermath of Marriage Equality in Australia: Religious Freedom and LGBTQ+ Non-Discrimination.’

Chapter 6: ‘The role of Constitutional Courts in Promoting Marriage Equality and their Relationship with Movements and Legislators.’

Chapter 7: ‘The European Court of Human Rights and the Notion of Family Life: A Common European Standard for the EU Framework.’

Chapter 8: ‘EU law and the right of Rainbow Families to move freely between EU Member States’

Chapter 9: ‘Same-Sex Relationships and the Child Law Perspectives: Another Child Protection Concern or Simply Another Way of Creating the Modern Family?’

Part 4: The Importance of Civil Partnership in an era of Same-Sex Marriage:

Chapter 10: ‘Relationships with Status: Civil Partnership in an Era of Same-Sex Marriage.’

The Heteronormative Underpinnings of Same-Sex Marriage:

Part 6: Consideration of the Necessity of both Social and Legal Change and the Inter-Action between them:

Chapter 13: ‘Why Legal Equality is Not Enough: The Case of Domestic Violence and Abuse in the Relationships of LGBTQ+ people.’