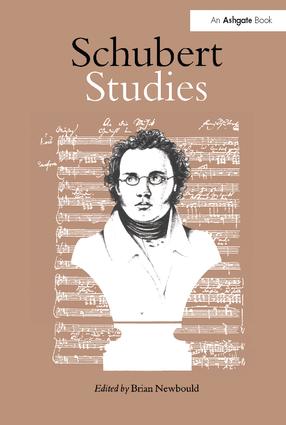 Schubert Studies comprises eleven essays by renowned Schubert scholars and performers. The volume sheds light on certain aspects of Schubert’s music and biography which have hitherto remained relatively neglected, or which warrant further investigation. Musical topics include analyses of tempo conventions, transitional procedures and rhythmic organization. There are reassessments of several works, using autograph research, performing experience and other approaches; while assumptions as to the extent of Schubert’s influence on later Czech composers are also brought into question. Concerns with aspects of Schubert’s biography, in particular the social and musical circles in which he moved, come under examination in several essays. The final two chapters deal specifically with the composer’s relationships with women, and the psychological and physiological illnesses from which he suffered. Each of the essays here charts new and existing evidence to provide fresh perspectives on these aspects of Schubert’s life and music, making this volume an indispensable tool for scholars concerned with his work.

’Schubert Studies is reader-friendly, with plates, biographical sketches of contributors, thorough endnotes for each essay, a general index, and an index of works by Schubert referred to in the text… the collection gives an excellent snapshot of the diverse trends in Schubert scholarship…held together by a competent and distinguished editorial hand.’ Journal of the Conductors Guild ’This diverse collection of 11 essays is particularly welcome…as it…illuminates facets of Schubert’s music which have been often misunderstood, as well as covering important biographical themes.’ Classical Music ’These essays profit enormously from the generous number of beautifully reproduced music examples…Schubert Studies is a worthy and sophisticated contribution to Schubert scholarship.’ Notes