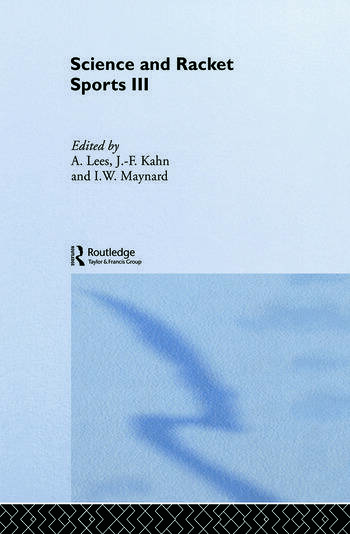 The papers are brought together by world-class experts: Lees is Chair of the World Congress for Sports Science Rackets Division, Kahn is Technical Director of the International Table Tennis federation, and Maynard is Secretary of the British Association of Sport and Exercise Scientists.

This valuable collection embraces a broad spectrum of the issues being examined by contemporary sports scientists, and will be of interest to researchers in sports biomechanics and ergonomics, sports engineering and elite racket sports professionals.

1. An On-court, Ghosting Protocol to Replicate Physiological Demands of a Competitive Squash Match  2. The Effect of a New Sports Drink on Fatigue Factors in Competitive Tennis Athletes  3. Dehydration During Table Tennis in a Hot, Humid Environment  4. Heart Rate Monitoring of Table Tennis Players  5. Influence of Exercise Intensity on Physiological Parameters and on the Drive Execution in Table Tennis  6. Monitoring Effort During Increasing Levels of Training Exercises in Table Tennis  7. Effect of the Type 3 (Oversize, Slow Speed) Tennis Ball on Heart Rate, Activity Level and Shots per Point During Tennis Play  8. Effects of the Ground Surface on the Physiological and Technical Responses in Young Tennis Players  9. Influence of Table Tennis Ball Diameter on Precision, Organisation of Movement and Heart Rate  10. Does Practicing on Clay Affect the Level of Motor Abilities of Tennis Players?  11. Physiological Demands and Injury in Racket Sports: Differences and similarities  12. Glenohumeral Arthrokinematics of Two Test-cases with Internal Impingement at the End of Late Cocking  13. The Effect of Tennis Participation on Bone Mass is Better Retained in Male than Female Master Tennis Players  15. An Overview of the Application of Biomechannics to Racket Sports  16. Service in Tennis: Speed and accuracy depending on the type of racket used  17. An Analysis of the Relationship between the Exit Angle of the Shuttlecock and the Impact Height of the Clear, Drop and Smash Strokes in Badminton  18. A Descriptive Study of the Rotative-topspin and of the Striking-topspin of Expert Table Tennis Players  19. The Technique used to Receive a Rotating Ball in Table Tennis  20. Myoelectric and Neuromuscular Features of the Table Tennis Forehand Stroke Performance Executed with Balls of Different Sizes  21. Measuring the Spin of a Ball by Digital Image Anaysis  22. Impact Prediction between Ball and Racket in Table Tennis  23. Comparison of the 40mm Ball with the 38mm Ball in Terms of Impact with a Table Tennis Racket Based on Predicted Impact Phenomena  24. Characterisation of Table Tennis Racket Sandwich Rubbers  25. Match Analysis in Racket Sports  26. Effect of Gender and Tennis Court Surface Properties upon Strategy in Elite Singles  27. Comparison of Tactical Solutions and Game Patterns in the Finals of Two Grand Slam Tournaments in Tennis  28. The Advantage of Playing Fewer Sets than the Opponent in the Previous Two Rounds of Grand Slam Tennis Tournaments  29. The Impact of Speed of Service in Grand Slam Singles Tennis  30. Functional Differences between Tennis and Badminton in Young Sportsmen  31. Patterns of Play of Elite Female Badminton Players  32. Performance Profiles of Elite Men's Squash Doubles Match Play  33. Differences between the Winning and the Losing Players in a Squash Game in Terms of Distance Covered  34. Monitoring of Time and Frequency of Players' Staying on the Basic T-position in Squash  35. A Process Oriented Approach for Match Analysis in Table Tennis  36. Performance Diagnosis through Mathematical Simulation in Table Tennis in Left and Right Handed Shakehand and Penholder Players  37. Table Tennis after the Introduction of the 40mm Ball and the 11-point Format  38. The Sources of Stress for Junior Table Tennis Players who Attended the English National Training Academy  39. The Effectiveness of Repetitive Practice on the Neuromuscular Pathways in Elite Badminton Athletes  40. Disguising Ones Intentions: The availability of visual cues and situational probabilities when playing against an international level squash player  41. Tennis as a Dynamical Self-organising System  42. Self-controlled Learning of the Forehand Topspin Stroke in Table Tennis  43. Anticipating Serve Direction: Implicit sequence learning in tennis  44. Impact of the New Scoring System on Expert Table Tennis Players' Activity