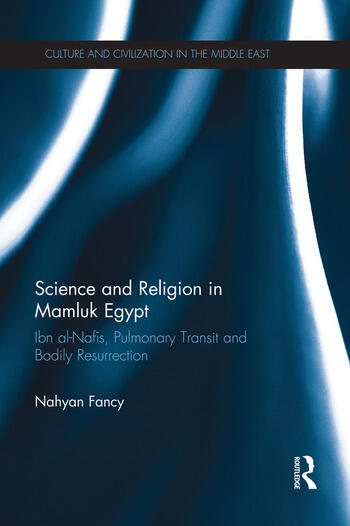 The discovery of the pulmonary transit of blood was a ground-breaking discovery in the history of the life sciences, and a prerequisite for William Harvey’s fully developed theory of blood circulation three centuries later. This book is the first attempt at understanding Ibn al-Nafīs’s anatomical discovery from within the medical and theological works of this thirteenth century physician-jurist, and his broader social, religious and intellectual contexts.

Although Ibn al-Nafīs did not posit a theory of blood circulation, he nevertheless challenged the reigning Galenic and Avicennian physiological theories, and the then prevailing anatomical understandings of the heart. Far from being a happy guess, Ibn al-Nafīs’s anatomical result is rooted in an extensive re-evaluation of the reigning medical theories. Moreover, this book shows that Ibn al-Nafīs’s re-evaluation is itself a result of his engagement with post-Avicennian debates on the relationship between reason and revelation, and the rationality of traditionalist beliefs, such as bodily resurrection.

Breaking new ground by showing how medicine, philosophy and theology were intertwined in the intellectual fabric of pre-modern Islamic societies, Science and Religion in Mamluk Egypt will be of interest to students and scholars of the History of Science, the History of Medicine and Islamic Studies.

1 Towards a Contextualist Approach 2 Ibn al-Nafis: A Rational Traditionalist 3 Reason, Revelation, Mystical Insight and Theological Certainty Chapter 4 ‘The Soul is Connected to the Entire Body’: Hylomorphic Psychology and Nafisian Physiology 5 Fruits of a New Physiology Conclusion

Nahyan Fancy is an Associate Professor of History at DePauw University, Greencastle, Indiana, USA. His research interests are in the history of science and medicine in post-1200 Islamic societies, particularly the intersections of medicine, religion and philosophy.

"This book should be read by any historian of pre-modern science and medicine, not only by Islamicists. Together with close readings and incisive comments of a number of key texts, we have sketches of long-term developments within the intellectual world of medieval Islam that need further research. Nahyan Fancy has succeeded admirably in combining a finished piece of work with a call for action within his field." —Leigh Chipman, Der Islam

"The book reflects fine scholarship, close acquaintance with the history of Islamic theology and philosophy, and is an important contribution to the history of medieval science, in particular through its shedding light on the creative and original contribution to medical knowledge of Islamic scholars of the post-Abbasid period, understood within the conceptual framework of their own times." —Housni Alkhateeb Shehada, Ben-Gurion University of the Negev, Bulletin of the School of Oriental and African Studies

"This is an important book and one that deserves to be read by anyone interested in pre-modern theoretical medicine." —Justin K. Stearns, New York University Abu Dhabi

"Fancy offers a clear structure, going back to the most important authors before Ibn al-Naf_ıs and placing him properly in the intellectual discussions of his time." —Raphela Veit, Digital Averroes Research Prject, University of Cologne

"He describes Ibn al-Nafīs’s life and scholarly milieu, investigates his position in the theological, philosophical, medical, and methodological discussions of his day, and analyzes his theories in the light of the medical traditions (Galenic and Avicennan) of his day with a view to describing his theory of the pulmonary transit—not circulation—of the blood."— Dimitri Gutas, Dept of Near Eastern Language & Civilizations, Yale University