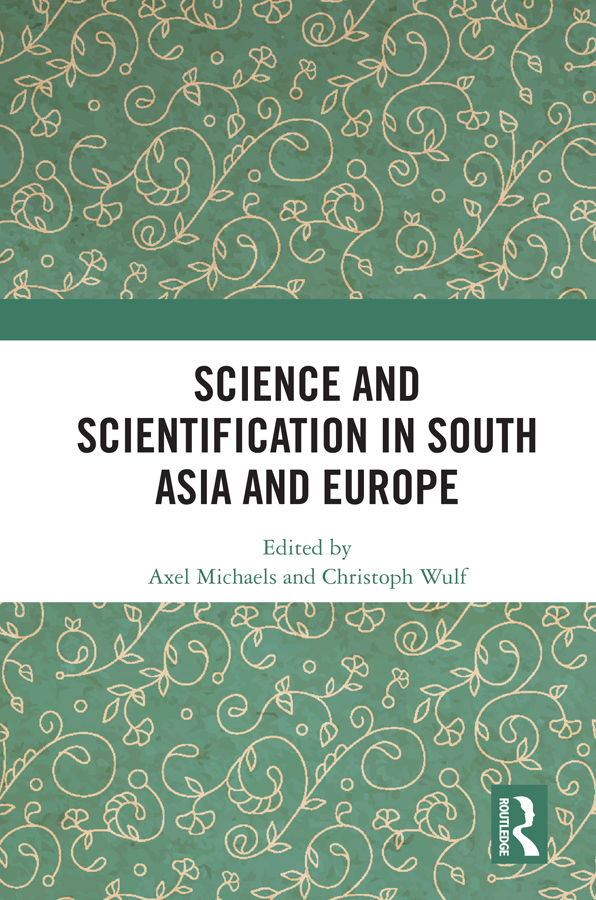 Science and Scientification in South Asia and Europe

This volume critically examines the role of science in the humanities and social sciences. It studies how cultures and societies in South Asia and Europe underwent a transformation with the adoption or adaptation of scientific methods, turning ancient cultural processes and phenomena into an enhanced scientific structure.

The essays in this book,

Drawing on textual material, extensive fieldwork and in-depth interviews, this book will be of great interest to scholars and researchers of philosophy, Indology, history , linguistics, history and philosophy of science, and social science.

Part I: Scientification and Scientism in India Introduction to Part I 1. The Art of Grammar in Context: ‘Science’, Human Interest, and the Construction of Cultural and Political Worlds 2. Sanskrit and Computer Science 3. Mathematics and Vedic Mathematics 4.The Birth of the (Exorcism) Clinic: Media, Modernity, and the Jinn 5.The Science Question in Alternative Agricultures: Zero Budget Natural Farming and the Emergence of Agronomical Pluralism in India 6. Counting Food? The Pitfalls of Caloric Conception of Nutrition and Alternative Theories of Food 7. Thinking About Agriculture in an Industrialising Economy: An Essay Part II: Philosophical and Anthropological Foundations in the European History of Science Introduction to Part II: Philosophy, Anthropology and History of the Humanities 8. The Dominance of Scientific Knowledge and the Devaluation of Other Forms of Knowledge 9. Modernity, Colonialism and the "Science of Language" 10. Scientism of Early Modern Age and the Prevailing Scholastic Discourse on principium individuationis 11. Prolegomenon to the Study of Science and Religion. A Philosophical and Historical Reflection 12. Technoscientific Knowledge versus Deep Knowledge 13. Science Cannot Do It Alone: Habits, Environment, and the Enchantment of Beauty 14. Knowledge and Science in the Art of Living 15. Transforming Knowledge into Cognitive Basis of Policies: A Cosmopolitan from Below Approach 16. The Limits of Science from the Standpoint of Philosophy

Axel Michaels is Senior Professor of Classical Indology at the South Asia Institute, University of Heidelberg, Germany. Since 2006, he is Vice President of the Heidelberg Academy of Science and head of the project ‘Religious and Legal Documents of Pre-modern Nepal’. His research interests include social history and history of Hinduism, theory of rituals, life cycle rites of passage in Nepal as well as the cultural and legal history of Nepal. He is the author of Homo ritualis. Hindu Rituals and its Significance for Ritual Theory (2016); Hinduism. Past and Present (2004); Siva in Trouble. Rituals and Festivals at the Pasupatinatha temple of Deopatan, Nepal (2008); Kultur und Geschichte Nepals (2018).

is Professor of Anthropology and Education at the Freie Universität Berlin, Germany. He is also a member of the Interdisciplinary Centre for Historical Anthropology, the Collaborative Research Centre (SFB, 1999-2012) and the Graduate School ‘InterArts’ at the Freie Universität Berlin. His books have been translated into 20 languages. He is Vice-President of the German Commission for UNESCO. His research interests include historical and cultural anthropology, educational anthropology, rituals, gestures, imagination, intercultural communication, aesthetics. He has authored and edited various books including (with G. Gebauer) Mimesis: Culture, Art, Society (1995); Anthropology. A Continental Perspective (2013); Human Beings and their Images. Imagination, Mimesis, Imaginary (German edition 2014; English edition in preparation); Exploring Alterity in a Globalized World (2016); (with J. R. Resina) Repetition, Recurrence, Returns. How Cultural Renewal works (2019); Bildung als Wissen vom Menschen im Anthropozän (2020; English edition in preparation).