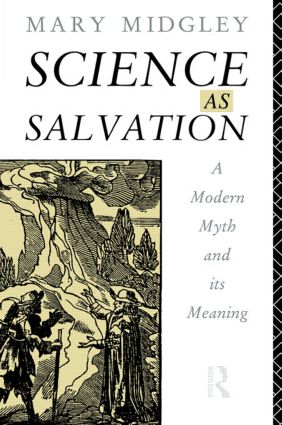 A Modern Myth and its Meaning, 1st Edition

What is the role of scientists in society? What should we think when they talk about more than just science? Mary Midgley discusses the high spiritual ambitions which tend to gather around the notion of science.

`Mary Midgley is a philosopher with what many have come to admire, and some to fear, as one of the sharpest critical pens in the West.' - Steven Rose, The Times Literary Supplement

`This book is a welcome, funny, robust and acute assault on …''Popular Science''.' - Brian Appleyard, The Times

`Midgley is a witty, sometimes brilliant writer … Science as Salvation is a cut above most attempts to offer a serious critique of science because it does so with precision and attention. No member of the public could fail to have his or her ideas about science and life's meanings altered.' - New Scientist

` … her clarity, warmth of tone and gentle wit make it a work accessible to the intelligent general reader. It deserves to be widely read.' - Philosophical Quarterly

`Midgely, a moral philosopher with a very deft pen … has sport with the blither spirits within the high priesthood of (for example) physics …' - Tim Radford, The Guardian

`… a rarity among books on the philosophy of science in that it is at once beautifully written, interesting, cogent, and coherent.' - Science Books and Films

`… a learned, deep and witty critique of the pretensions of scientists who extrapolate larger visions of the cosmos and of the place of humans in it.' - Christian Century