Scientific Statesmanship, Governance and the History of Political Philosophy 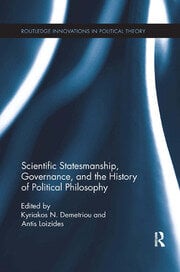 Scientific Statesmanship, Governance and the History of Political Philosophy

Over the centuries, the question of "good" or "effective" governance has undergone several transformations and ramifications to fit within certain social, cultural and historical contexts. What defines political knowledge? What is the measure of expert political leadership? Various interpretations, perspectives, and re-conceptualizations emerge as one moves from Plato to the present.

This edited book explores the relationship between political expertise, which is defined as "scientific statesmanship or governance," and political leadership throughout the history of ideas. An outstanding group of experts study and analyze the ideas of significant philosophers, such as Plato, Aristotle, Augustine, Machiavelli, Hobbes, Locke, Montesquieu, Kant, Burke, Comte, and Weber, among others. The contributors aim to interpret these thinkers’ approaches to "scientific statesmanship," deepening our understanding of the idea itself and decoding its theoretical complexities.

In the face of the ongoing crisis of the traditional party system and the eroding structures within the new cultural-financial and political environment in the era of globalization, tracing the connection between Plato’s idealist statesmanship to twentieth-century modernist politics is an important and ever-challenging enterprise; one that promises to interest scholars of the history of western political thought, philosophy, classics and the classical tradition, political science, and sociology.

Kyriakos N. Demetriou is Professor of the History of Political Thought at the University of Cyprus. His research interests are in the areas of the history of classical reception, nineteenth-century intellectual history, Platonic scholarship, and the history of historiography.

Antis Loizides is Visiting Lecturer at the University of Cyprus. His research interests include British utilitarianism, the moral and political thought of John Stuart Mill and James Mill, social contract theories, happiness, justice, and liberty.

"These original essays by distinguished scholars derive their common focus from the political thought of antiquity but embrace both ancient and modern thought from Socrates, Plato, and Aristotle to Machiavelli, Hobbes, Montesquieu, Burke, and Max Weber (among others). The notion of scientific statesmanship brings together the idea of science or philosophy with that of practical politics and raises for the serious student of political thought important questions concerning the nature of the human condition itself."—Frederick Rosen, University College London, UK