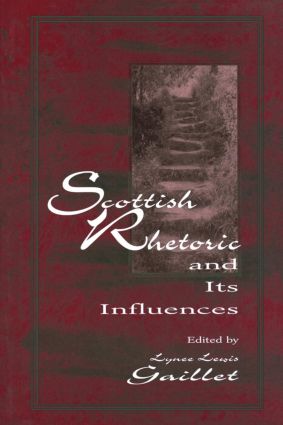 Scottish Rhetoric and Its Influences

An outgrowth of the recent meeting of the International Society of the History of Rhetoric, this collection challenges the reader to reexamine the broad influence of 18th- and 19th-century Scottish rhetoric, often credited for shaping present-day studies in psychology, philosophy, literary criticism, oral communication, English literature, and composition. The contributors examine its influence and call for a new appraisal of its importance in light of recent scholarship and archival research. Many of the essays in the first section discuss the contributions of recognized influential figures including Adam Smith and Hugh Blair. Other essays focus on the importance of 18th-century Scottish sermons in relation to public discourse, audience analysis, peer evaluation, and professional rhetoric. Essays in the second section address 19th-century rhetorical theory and its influence on North American composition practice.

"…provides an interesting glimpse into a significant moment in European and American preaching history and will be of interest to both students of preaching and rhetoric."