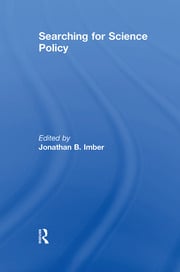 The findings of scientific research often provide an important baseline to the formation of public policy. However, effective communication to the larger public about what scientists do and know is a problem inherent to all democratic societies. It is the prerogative of democratic societies to determine what kind of scientific research will be funded. Searching for Science Policy offers innovative ways of thinking about how the rhetoric and practice of science operates in various institutional contexts.

The book is divided into two parts. Part 1, "Policy Uses and Misuses of Science," explores the various ways in which scientific claims are inevitably mediated by how they are used. Joel Best, draws on statistics involving missing children, violence against women, and attendance figures at political demonstrations to demonstrate how the motivations to use inaccurate and misleading numbers stems directly from the ideological and organizational interests of those using them. Judith Kleinfeld analyzes recruitment policies for women scientists at MIT, showing how hiring practices that may be justifiable on extra-scientific factors are carried out based on pseudo-scientific studies not subject to public scrutiny. Robert MacCoun addresses the journalistic misuse of drug and drug abuse statistics and shows how this profoundly distorts policy implications drawn from them. And Allan Mazur examines the role scientific evidence has come to play in the law, pointing out the pitfalls of its intrinsic quality and how such evidence may be interpreted or misinterpreted by judges and juries.

Part 2, "Searching for Science Policy," extends discussion of the role of science to specific ideas about how public policy-making might be improved in matters of law, family, environment, drug use, and health. Mark Kleiman weighs the sometimes conflicting claims of science and social order in formulating drug policy. Norval Glenn calls for closer cooperation between professional associations, the media, and researchers in reporting provisional social science findings to the public. Stanley Rothman and S. Robert Lichter examine the dynamic by which environmental organizations shape public perceptions of risk and harm. And in the concluding chapter, Sheila Jasanoff looks closely at differences between the provisional nature of science as normally practiced and the more contentious sphere of litigation that demands ultimate resolution.

In a time when scientists find themselves subject to more public scrutiny than ever before, the well-informed citizen is no longer a moral ideal but rather a social imperative. Searching for Science Policy helps to clarify the grounds and the circumstances of more effective use of science in public discourse.