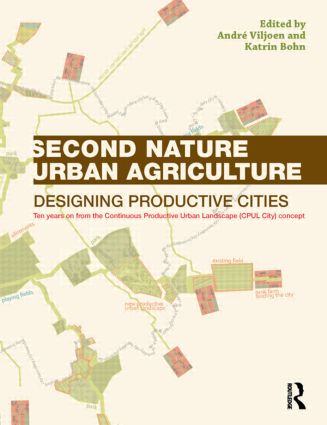 updates and extends the authors' concept for introducing productive urban landscapes, including urban agriculture, into cities as essential elements of sustainable urban infrastructure. It reviews recent research and projects on the subject and presents concrete actions aimed at making urban agriculture happen.

As pioneering thinkers in this area, the authors bring a unique overview to contemporary developments and have the experience to judge opportunities and challenges facing those who wish to create more equitable, resilient, desirable and beautiful cities.

"Second Nature Urban Agriculture is pretty extraordinary. If we are to create built environments which are ‘locked in’ to the radically low carbon future we need to be creating, we really can’t afford to build any new developments that don’t include urban agriculture. It needs to be everywhere, and clearly at the moment that isn’t happening fast enough. Viljoen and Bohn tackle this from a range of angles, and there is something here to inspire those anywhere along a spectrum from, at one end, wondering how to grow food where they live in a city, to, at the other, planners and designers wanting to undertake ambitious scale projects. Hard to recommend it highly enough." - Rob Hopkins, Founder of Transition Network and Transition Towns

"Second Nature" describes the developments since CPUL (2005) and offers planners and designers - next to the continuation of the urban design ideas from 2005 - actual proposals aiding the planning process for urban agriculture.

What is noticeable in "Second Nature" is an understanding of CPUL as process. There is an urban design proposal showing how productive urban landscapes could look, but part of this proposal is also the design of those processes needed to anchor urban agriculture in the city. Bohn and Viljoen do not only visualise their ideas, they also illustrate graphically clear the processes they analysed." – Philipp Stierand (2014) at: Speiseräume: stadt/ernährung (blog)

Katrin Bohn is an architect and guest professor at the Technical University of Berlin. For the past 12 years, she has also taught architecture and urban design, mainly as a senior lecturer at the University of Brighton. Together with André Viljoen, she runs Bohn&Viljoen Architects, a small architectural practice and environmental consultancy based in London. Bohn&Viljoen have taught, lectured, published and exhibited widely on the design concept of CPUL City (Continuous Productive Urban Landscape) which they contributed to the international urban design discourse in 2004. Katrin's projects on productive urban landscapes include feasibility and design studies as well as food growing installations and public events, mainly for UK and German clients.

André Viljoen is an architect and principal lecturer / academic program leader in architecture at the University of Brighton, as well as, with Katrin Bohn, contributing to the work of Bohn&Viljoen Architects. The publication, in 2005, of Bohn&Viljoen’s book CPULs Continuous Productive Urban Landscapes: Designing urban agriculture for sustainable cities consolidated a body of research underpinning the case for urban agriculture as an essential element of sustainable urban infrastructure. This book and the associated design concept had a significant international impact, resulting in invitations to consult, exhibit and lecture widely. In 2012, André jointly edited the book Sustainable Food Planning: evolving theory and practice. This collection was the first of its kind to bring the disciplines of planning, design, public health and governance into dialogue to address the global challenge of food security.