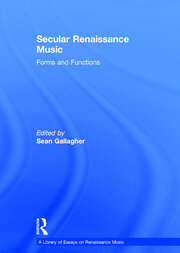 Secular music of the fifteenth and sixteenth centuries encompasses an extraordinarily wide range of works and practices: courtly love songs, music for civic festivities, instrumental music, entertainments provided by minstrels, the unwritten traditions of solo singing, and much else. This collection of essays addresses many of these practices, with a focus on polyphonic settings of vernacular texts, examining their historical and stylistic contexts, their transmission in written and printed sources, questions of performance, and composers’ approaches to text setting. Essays have been selected to reflect the wide range of topics that have occupied scholars in recent decades, and taken together, they point to the more general significance of secular music within a broad complex of cultural practices and institutions.