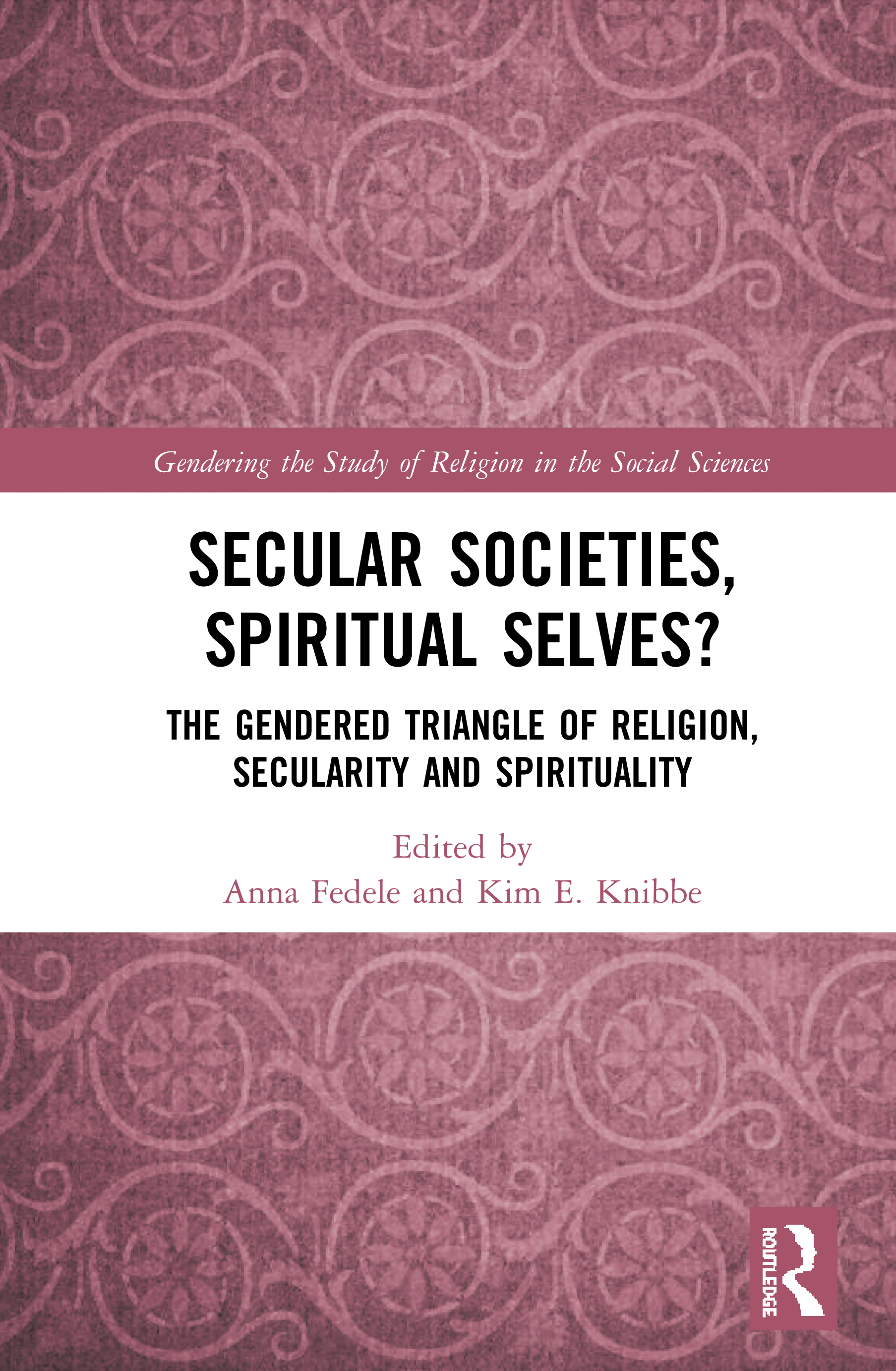 The Gendered Triangle of Religion, Secularity and Spirituality, 1st Edition

Secular Societies, Spiritual Selvesis the first volume to address the gendered intersections of religion, spirituality and the secular through an ethnographic approach.

The book examines how ‘spirituality’ has emerged as a relatively ‘silent’ category with which people often signal that they are looking for a way to navigate between the categories of the religious and the secular, and considers how this is related to gendered ways of being and relating. Using a lived religion approach the contributors analyse the intersections between spirituality, religion and secularism in different geographical areas, ranging from the Netherlands, Portugal and Italy to Canada, the United States and Mexico. The chapters explore the spiritual experiences of women and their struggle for a more gender equal way of approaching the divine, as well as the experience of men and of those who challenge binary sexual identities advocating for a queer spirituality.

This volume will be of interest to anthropologists and sociologists as well as scholars in other disciplines who seek to understand the role of spirituality in creating the complex gendered dynamics of modern societies.

Introduction: Spirituality, the Third Element in a Gendered Triangle

2.Goddess Spirituality in Italy: Secular and Spiritual, Two Sides of the Same Coin?

3.Healers, Missionaries and Entrepreneurs of the Feminine: The Secularisation of Contemporary Women’s Spirituality

5. The (B)earth of a Gendered Eco-Spirituality: Globally Connected Ethnographies Between Mexico and the European Alps

6. Re-enchanted Selves: An Ethnography of Wild Woman Workshops in Belgium

8. "God Wants Spiritual Fruits not Religious Nuts": Spirituality as Middle Way Between Religion and Secularism at the Marian Shrine of Fátima

9. "A Merely Private Activity": Spiritual Consumerism as a Way to Transform Gendered Relationships to Secular and Religious Authorities

10. Is Yoga a Girl’s Thing? A Case Study on Working Class Men Doing Yoga in Jail

11. "Things I Do Are Manifestations of Love": Queer Religiosities and Secular

Afterword: To the Vagina Triangle and Beyond!

Anna Fedele is Senior Researcher at the CRIA-Lisbon University Institute. Her research focuses on the intersections of gender and religion with a particular interest for ritual creativity and pilgrimage. She has done fieldwork in Southern Europe and Latin America about holistic spiritualities and Catholicism.

Kim Knibbe is Associate Professor Anthropology and Sociology of Religion at Groningen University. She is currently directing the project "Sexuality, Religion and Secularism" (funded by the Netherlands Foundation for Research, NWO). Previous research focused on Catholicism and spirituality in the Netherlands and on Nigerian Pentecostalism in Europe and the Netherlands.

Gendering the Study of Religion in the Social Sciences

The series invites proposals for books that address the entanglements of religion and gender from a diversity of social scientific perspectives, based on contemporary empirical research on a variety of religious and spiritual manifestations and dynamics in religious contexts. Religion everywhere concerns itself with gender, often upholding and inscribing gender differences. Some feminists have argued that religion is inherently patriarchal and oppressive. At the same time, very often religion is dominated at least numerically by women and social scientists have emphasized the empowering effects that religious experiences can have for women.

The nexus of religion, gender and society raises many interesting questions. How do religious and spiritual practitioners negotiate gender, ethnicity and class in their everyday lives, political projects and spiritual practices? How do they create alternative ways of being and acting in the world? How do they attempt to transform the structures and processes that shape our social and cultural worlds? This series intends to be a platform for research that addresses these kinds of questions. Contributions may come from a variety of disciplines such as anthropology, sociology, religious studies, gender studies, political sciences, history, geography and psychology. We welcome monographs and edited volumes that adopt a gender lens to explore religion using qualitative or mixed methods, investigating also the intersections of ethnicity, class, LGBTQ rights and other relevant topics.

To discuss a book proposal, please contact the series editors: