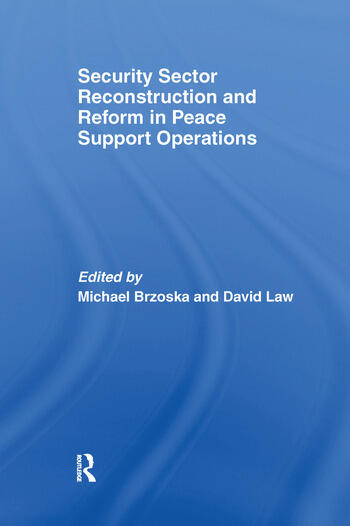 This volume provides a framework for analyzing security sector reform under international tutelage.

Following violent conflict and military interventions, international organizations or coalitions of countries increasingly engage in post-conflict reconstruction. Part of the international post-conflict agenda is the ‘reconstruction’ or ‘reform’ of the security sector (SSR). In post-conflict situations, the security sector is often characterized by politicization, ethnicization, corruption of the security services, excessive military spending, lack of professionalism, poor oversight and inefficient allocation of resources. At the same time, there is great need for effective and efficient (re-)establishment of a legitimate monopoly of force. While initially this is in the purview of the external intervention forces, they also face the task of the building up of effective, efficient accountable and democratically legitimized security forces as quickly as possible.

This book was previously published as a special issue of International Peacekeeping.

Michael Brzoska, Director of Research, Bonn International Center for Conversion (BICC), has published widely on the role of armed forces in developing countries, military expenditures and the arms trade and security sector reform.

David Law is Senior Fellow, Security Sector Reform, Geneva Center for the Democratic Control of Armed Forces (DCAF) and coordinator of the DCAF Working Group on Security Sector Reform. In this capacity, he works on such issues as security sector reform in the Euro-Atlantic area, the interface between the security and development communities as well as the conceptual and programming links between security sector reform and other new approaches to security that have emerged in the post-Cold War environment, such as Human Security

'...this book provides us with a clear set of indexes to help us determine what we mean by successful SSR. It also lays out the various SSR challenges for international actors in the detailed descriptions of the six most prominent case studies. As a result, this is a very useful book, not only for students of SSR but also for all those interested in peace support operations.'
Atsushi Yasutomi, Security Dialogue